Posted by The Agri-Food Value View 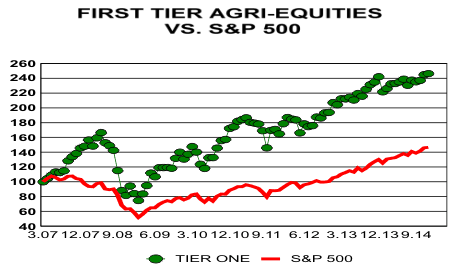 China now surpasses the U.S. in real economic terms. “Real”, most simply defined, is the production and consumption of actual goods and services with prices ignored. In that “real” process the Chinese economy becomes a receptacle for the resources of the world, tangible and human. Some in the world, like Agri-Equities, that service those needs have benefitted, and will certainly do so in the future. Those that sell to the biggest customers in the world, China, will be the success stories. Top tier Agri-Equities are one of those beneficiaries. Our index of First Tier Agri-Equities, as shown in chart below, is at a new, all time high for the second month. That action was recently confirmed by composite Agri-Equity Index also hitting a new all time high recently. Many investors have not been aware of the exceptional long-term returns in Agri-Equities because of a general misunderstanding of Agri-Commodities, and of commodities in general. As the Agri-Food Price Index, which measures the price trend of 17 Agri-Commodities, portrays in chart to right, the price of a portfolio of Agri-Commodities has not collapsed as many forecast this time last year. Rather, this index hit an last all time high end of March. Reason for that is as the Chinese economy has grown larger than that of the U.S. the incomes of consumers in China have risen. Those richer individuals like to eat better, every day. The propensity of China to buy soybeans, corn, sorghum, etc. far exceeds that for over priced electronic toys masquerading as cell phones.

Agri-Companies service and benefit from producers of a vast array of Agri-Commodities. Above chart shows percentage price changes for 17 important Agri-Commodities thus far in 2014. Those steaks long forgotten in the back of your freezer, beef in chart, have easily out performed the NASDAQ. So would have a pound of butter. Cattle ranchers would have made a clear mistake selling their cattle, and buying NASDAQ stocks. And due to the natural tendencies of Agri-Commodities price of U.S. corn, one of the lower bars, is likely to perform better than the NASDAQ in the year ahead.

Oil prices have indeed collapsed while prices of many Agri-Commodities have not. Both are commodities as are the ores, iron, copper, and Gold for example. The economic drivers of those three commodity groups are different. While China may buy less copper or iron ore in any one year, we can assure you that Chinese consumers will eat every day.

The other mistakes made widely by the investment community are fixation on a single or small set of Agri-Commodities and extrapolating a price trend indefinitely into the future. Corn is a good example of both tendencies. Corn, while clearly important to some regions, is not the total of Agri-Foods. Corn prices did fall, but those prices are not falling. Low, or high, Agri-Commodity prices have a natural tendency to create higher, or lower, prices in the future. For that reasons, U.S. corn prices appear to have bottomed, and are likely to rise over the coming year.

In building a portfolio one selects companies that are expected to receive, or be in front of, a cash flow. With the largest real economy in the world, China, now locked into the importation of Agri-Foods to satisfy the needs of its citizens, that country is also going to be “exporting money” in exchange for those Agri-Foods. Recipients of that cash flow will include the Agri-Equities. Chinese consumers can live quite happily without iPhones, but not without Agri-Foods. Agri-Equities allow your portfolio to benefit from largest real economy in the world. Why would one ignore such an opportunity?

AGRI-FOOD THOUGHTS is from Ned W. Schmidt,CFA, publisher of The Agri-Food Value View, a monthly exploration of the Agri-Food grand cycle being created by China, India, and Agri-Energy. To learn more, use this link: www.agrifoodvalueview.com Follow: @AgriFoodVV