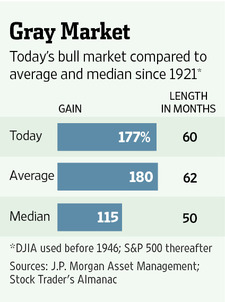 “A five-year anniversary should give pause to anyone who lends much credence to historical patterns. Going back to 1921, the current bull market’s rally is only two percentage points shy of the average performance. And the average bull market has lasted only six weeks longer.”

Talk about a lavish birthday gift.

Strategist Sam Stovall of S&P Capital IQ points out that when bull markets reach their fifth anniversary—as the current one will this week—they have historically clocked another 26% gain, on average, if they survived for another year. That would, given today’s level, create up to an additional $5 trillion in U.S. stock-market value.

But the same people who suggest that history might repeat, or at least rhyme, ignore less pleasant parallels. The last time pundits trotted out similar measures was in October 2007 when that bull market turned five. It ended just days later.

Those who suggested the market could rise into 2008 and beyond had convincing arguments. The market’s trailing price/earnings ratio was 16.9 times—actually lower than at the start of that bull run. And stocks had merely doubled from the bottom, a lower increase than in a typical bull market.

Most convincingly, the Federal Reserve had the market’s back. Less than a month earlier, it had reduced rates by half a percentage point. Deeper than expected, that cut catapulted the Dow higher by 336 points on the day.

Trimming half a percentage point seems positively quaint compared with trillions of dollars in quantitative easing recently. But it would be foolhardy to assume that monetary policy has rendered bear markets extinct. And for what it’s worth, the current bull market has seen the S&P 500 rise by 177%. Today’s trailing P/E ratio of 17.9 times, meanwhile, is a full point higher than in October 2007.

In fact, a five-year anniversary should give pause to anyone who lends much credence to historical patterns. Going back to 1921, the current bull market’s rally is only two percentage points shy of the average performance. And the average bull market has lasted only six weeks longer.

Moreover, those averages are skewed higher by the long 1920s and 1990s bull markets, marked by speculative manias and ending in economic crises. One way to factor out those extremes is by focusing on median performance and life span instead. These are 115.4% and 50 months, respectively—leaving the current bull market looking long in the tooth indeed.

This week’s market milestone may lead to plenty more open road. Just remember that dangerous curves are tough to see at such high speeds.

Write to Spencer Jakab at spencer.jakab@wsj.com