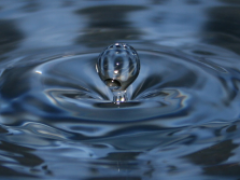 Below are factors that suggest that water will be the world’s most sought-after commodity in a handful of decades.

I couldn’t help but notice a new ad on Yahoo! Mail from Fidelity Investments that boldly asks, “Are you ready for water to become a globally traded commodity?”

This video accompanying the Fidelity Investments ad is as thought-provoking as it is ominous. The video discusses the respective costs in water to make items like a slice of bread, a cup of coffee, and a hamburger. From the video: “With global population expected to increase by 30 percent by 2050 and more developing nations transitioning to higher standards of living, regional water shortages and peak water issues will become more widespread.” The issue of water becomes more complicated in considering the accessibility and availability of drinking water in the years to come. From the video: “Global consumption of water is expected to increase by 40 percent over the next 20 years. And according to some estimates, more than half of the world’s population could be living under conditions of water stress by 2025.” Thus, the video suggests that water stress could intensify geopolitical affairs and “border disputes” related to the water supply.