About The Semiconductor Sector 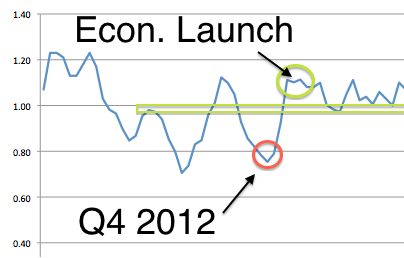 I’ve bludgeoned you over the years about how the Semi signal in January of 2013 was the first real proof that the positive economic cycle that is so readily obvious now was in play. We used the Semi Equipment book-to-bill ratio first and foremost per my little graphic here… The theoretical progression was to be along the lines of Semi Equipment → Semi → Broad Tech → Manufacturing → Employment = Widespread acknowledgement of a strong economy.

So last year we (NFTRH) began the process of evaluating the reverse of the above, that would start the clock ticking on the “widely acknowledged strong economy”.

But in this age of interconnected information and sound bites flying at us with the power of 10 billion butterfly sneezes it is important to realize that the markets and especially the economy can move like aircraft carriers trying to turn in waters filled with all sorts of hyper active sharks, PT Boats, day traders, casino patrons, men, machines, substance abusers (info junkies) and Ma & Pa all trying to make some coin. In other words, the process can be real slooooow. Just as it was in turning to the positive side half a decade ago.

As the mainstream media were feeding this garbage to the masses… Fund manager looks beyond FAANG stocks and finds even bigger winners for 2018 … we took exception and did a little digging into the fundamentals, just as we did back in 2013.

NFTRH first included this daily chart of two premier fab equipment companies (as mentioned in the MSM article linked above) vs. the broad Semi sector. The first breakdown came in February.

We also used a weekly view to hold a guarded to bearish view when the ratios failed to recover despite the February/March bounce.

We also have this cool looking chart of AMAT & LRCX vs. broad Semis for a little historical perspective.

Finally, we review broad Semi leadership (to Tech) having gone in the tank each week in NFTRH using a fine tuned daily chart. But the weekly and monthly give longer-term perspective with respect to the economic cycle.

Is the economic cycle over? There is no evidence of that. But the signalling has not been positive since about the day that the bullish fund manager noted above unwittingly called a top in these indicators. Indeed, I have an industry contact (whose input was shared with NFTRH subscribers) who provided information very much in line with the charts above, but did not sound like the end of the world either.

With respect to the Semi sector I am not at all sure whether the big cycle is ending or is just getting interrupted. But for 8 months now it has been better to have the information above than not to have it. Buying AMAT and LRCX per Mr. Fund Manager would have been ill-advised. Having a discrete relative bearish view on Semi Equipment would have been advised. Simple.

Now we can proceed with open minds and take what comes, bullish or bearish. The above is yet another little ‘tune out the MSM’ parable among other things I guess.