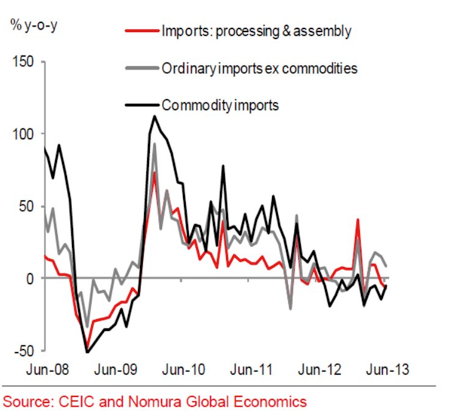 There’s a three year downward trend in Chinese imports underway. The chart below, from Nomura Global Economics, shows the trend quite clearly. China’s exports and imports declined again in June. Exports fell 3.1 percent yoy – the most since the global financial crisis in 2008 – while imports dropped 0.7 percent. The poor June report follows a May collapse in export gains – fake invoices had inflated data for the first four months of the year, the bogus data enabled exporters to evade currency controls and bring extra money into the country. Trade growth might come in below the government’s target of eight percent for the year.

China’s communist leaders want to pursue a slower, more self-sustaining growth model based on domestic consumption, this model reduces reliance on trade and investment. China can handle slowing exports as long as the slowing is accompanied by rising internal consumption – a successful switch from being an export led economy to a consumer one. But since the start of 2013 a very different scenario is taking place, one that’s definitely not under our dear communist leaders control, imports and exports are both dropping, Chinese trade is being gutted while Japanese exports are rising on higher shipments to the US and China.

How did this happen?

To put it as simply as possible; a depreciation of the Japanese yen is making Chinese exports less competitive in the world market and Japanese imports more attractively priced for Chinese consumers. Less Chinese made goods are being bought at home and abroad.

Japan, the world’s third largest economy, is currently an economic ray of sunshine – the Japanese economy grew at an annualized 4.1 percent in the first quarter and their stock market is soaring. Abenomics goal is to end a long miserable decade and a half of deflation by kick starting the economy, this will happen because of massive yen creation. The fiat balloon will induce consumers to spend and corporations to reinvest profits, convinced by a rising stock market and surging exports that all is well.

Japanese efforts are starting to pay off as factory output is rising (the most since December 2011), retail sales are slowly climbing and some inflation is starting to creep into consumer prices. The weaker yen is drawing investment away from emerging markets and toward Japanese equities – the Nikkei 225 has been soaring. The Bank of Japan has driven down the yen against the dollar over the last six months in an effort to increase exports and cut imports into the country resulting in Japan throwing a very large monkey wrench into Chinese plans. As we can see Abenomics is having severe Abelications (Abe-li-ca-tions), but the worst is yet to come –  the ignition of a brutal currency war in Asia.

China will, in response to Japans deliberate and massive yen depreciation, allow its currency the yuan to depreciate forcing all other Asian countries (and the EU and Uk) to do the same to keep their exports competitive with China’s and Japan’s.

Currency War – when countries around the world start competing (competitive devaluation) to make their currency cheaper than everyone else’s as a way to boost trade.

So how do currency wars get started? From Wikipedia comes the following:

“Currency war, also known as competitive devaluation, is a condition in international affairs where countries compete against each other to achieve a relatively low exchange rate for their own currency. As the price to buy a particular currency falls so too does the real price of exports from the country. Imports become more expensive. So domestic industry, and thus employment, receives a boost in demand from both domestic and foreign markets…The policy can also trigger retaliatory action by other countries which in turn can lead to a general decline in international trade, harming all countries.”

Japan started a currency war with China and the world. But not with the U.S., the U.S. will be the beneficiary of all the tit-for-tat repercussions with a strong dollar.

There’s an investment opportunity in this mess that I’m paying attention to: uranium. How do I get uranium out of a weaker yen and a stronger dollar? The cost of Japanese imports is really climbing, month after month of increases, remember energy imports become more expensive when you weaken your currency against the world’s reserve currency, the U.S. dollar, and Japan has been obliged to pay more for dollar denominated energy purchases – as has everybody else.

Japan imports most of its energy and utilities are being forced to keep thermal power stations running at full capacity to make up for the closure of most nuclear power plants since the Fukushima Daiichi incident in March 2011. There’s no way to reduce fuel import volumes, the resulting massive cost to the Japanese economy and return to a trade surplus, unless they turn back on their nuclear power plants. And that, at the same time the HUE ends, will kick start the ‘Global Civilian Nuclear Renaissance.’ That’s why I think current uranium investments are going to benefit from Abenomics.

Japan has 55 nuclear reactors using 21.3 million pounds (mlbs) of uranium – 12-13 percent of annual global uranium demand. A six-fold increase in China’s installed nuclear capacity is expected by 2020. The HEU agreement ends late in 2013 and removes 24 million pounds of uranium supply from the market.

However with inventories dwindling and the HEU agreement ending, the drying up of most non-mining uranium supply sources seems certain.

NuCap Ltd., a London-based industry consultancy, says the annual consumption of uranium will increase to 265 million pounds by 2020

According to The Australian newspaper global demand for uranium fuel is going to increase to 280 million pounds U308 by 2030.

A near term uranium producer is definitely on my radar screen, have you got one on your screen?

If you’re interested in learning more about the junior resource and bio-med sectors, and quality individual company’s within these sectors, please come and visit us at www.aheadoftheherd.com