A Year of Deflation Coming Up?

Posted by John Rubino via DollarCollapse 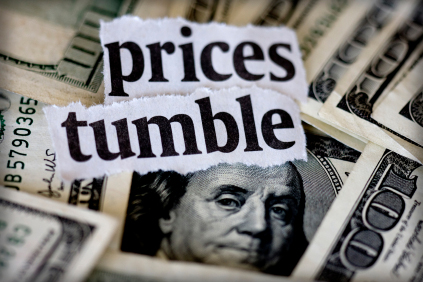 Being deeply in debt is like being grossly overweight. You’re carrying around this extra baggage that slows you down, and without continuous, conscious effort you tend to stop moving.

That’s the situation in which the world finds itself. The debts accumulated in the past couple of decades are weighing down the major economies, threatening to pull them back into recession if not countered by massive deficit spending and monetary ease. This, according to the following Bloomberg article, is causing prices to fall in most sectors:

IPhone Price Cuts Send Bond Inflation Bets to 11-Year Low
Price cuts on everything from iPhones to Folgers coffee show why investors in U.S. government bonds anticipate low inflation for the next decade even as the Federal Reserve considers injecting more cash into the economy.

A measure of price-increase predictions used by the Fed to set policy, the five-year, five-year forward break-even rate, has averaged 2.54 percent this year. That’s the lowest since 2001 for the measure, which gauges expectations for inflation between 2017 and 2022. Economists surveyed by Bloomberg forecast that 10-year government bonds will yield 1.76 percent by Dec. 31, down from 2.76 percent in 2011 and 3.19 percent in 2010.

Bond yields show investors expect that soaring gasoline and corn prices will fail to spread throughout the U.S. economy amid a slump in wages and unemployment at more than 8 percent since the beginning of 2009. That’s giving the Fed scope to add to the $2.3 trillion of government securities it has bought since 2008, an option Chairman Ben S. Bernanke said last week is possible amid “grave concern” about joblessness.

“The bond market doesn’t view inflation as a problem,” Anthony Valeri, a market strategist in San Diego at LPL Financial, which oversees $350 billion of assets, said Aug. 28 in a telephone interview. “The bond market still views deflation as a greater risk to the economy for the next one to maybe two years.”

‘Constrained’ Budgets
Retailers are responding to sluggish economic growth by cutting prices. Sales rose 0.8 percent in July from the previous month, the biggest increase since February, government figures showed Aug. 14. That followed three straight months of declines, including a 0.7 percent drop in June, the most since May 2010.

“What we’re suffering through in the job market is reverberating through the economy,” Adolfo Laurenti, deputy chief economist in Chicago at Mesirow Financial Inc., which oversees $61.7 billion, said in a telephone interview Aug. 27. “These lackluster sales at many major retailers are really reflecting the fact that budgets are still constrained.”

Average hourly earnings rose 1.7 percent in July from a year earlier, the smallest increase since December 2010 and down from a peak of 3.8 percent in June 2007, the latest Labor Department data show. The Bloomberg Consumer Comfort Index was little changed at minus 47.3 in the week ended Aug. 26, from the prior reading of 47.4 that was the weakest since January.

Bentonville, Arkansas-based Wal-Mart Stores Inc. (WMT) cut its price for Apple Inc.’s 16 gigabyte iPhone 4S to $148 from $188, which was already cheaper than the manufacturer’s suggested retail price of $199. Second-quarter sales at Wal-Mart’s U.S. stores open at least a year gained 2.2 percent, below the 2.6 percent in the previous quarter, the company said Aug. 16.

Wal-Mart Cuts
Wal-Mart cut prices on paper household products by 14.1 percent in August from a year earlier and health and beauty aids by 13.7 percent, according to Bloomberg Industries data. The cost of laundry goods has climbed 18 percent since September 2010 at the stores, while household paper items have increased 2.3 percent, the data show.

The company announced a program discounting gasoline by 15- cents-per-gallon on Aug. 29. The average U.S. price of a gallon of regular unleaded gasoline has risen 16 percent this year to $3.80, according to AAA.

“Our customers are under pressure from the economy,” Duncan MacNaughton, chief merchandising officer for the world’s biggest retailer, said that day on a conference call. “We have always had aggressive prices on gas. This takes it to the next level.”

A measure of prices tied to consumer spending was the same in July as in the previous month, according to an Aug. 30 Commerce Department report. The core personal consumption expenditure deflator, which excludes food and energy costs, rose 1.6 from a year earlier, down from 2.2 percent in March.

Price Index
The consumer price index was unchanged for a second month in July after plunging 0.3 percent in May, the most since December 2008, according to the Labor department.

Food price inflation caused by the worsening U.S. drought, as well as higher gasoline prices, is being offset by employment and wages that have failed to recover sufficiently, Valeri said.

“The real driver of inflation is labor costs, how much people are making,” LPL Financial’s Valeri said. “Salaries aren’t increasing much at all.” Valeri said he favors intermediate-maturity corporate bonds because “interest rates are going to stay low for a while.”

Some thoughts
To summarize, prices for grains and oil (and health insurance and college tuition) are way up but since wages are stagnant, higher prices for some things leave less disposable income for other things, which fall in price due to reduced demand. The increases and decreases tend to cancel out, resulting in low or no inflation, and maybe, if the process gathers momentum, deflation. That’s the story of the coming year.

Now the question is how governments will respond. If their goal is to inflate away their debts, then they will, very soon, open the monetary floodgates and give us the much-anticipated global coordinated quantitative easing. In which case by late 2013 we’ll be back in inflation mode, with soaring commodity prices, falling currencies and a general sense of things spinning out of control.

But what if near-term inflation is not their goal? As reader Bruce C noted in a comment on a previous DollarCollapse article:

I’m still unclear on what the Fed’s (and all of the big central banks’) real agenda is. I know the official and conventional belief is that the Fed works for the benefit of the US, and that all the other central banks are exclusively concerned about their own country of domicile, but that is not necessarily true. Another perspective is that the central banks form a global cartel that is primarily interested in a global consolidation of the banking and financial system, often described as “a one world government with a single currency.” I honestly don’t know if, or the extent to which, that conspiracy theory is true, but I think we are all going to find out pretty soon. I say this because the way things have evolved so far all over the developed world is a perfect opportunity to usher in global governance, if that is their intention. Basically, what I’m saying is IF the Fed or the ECB initiates a significant level of “monetary stimulation” relatively soon then I submit that the one-world conspiracy theory is wrong. Stated differently, by holding back on additional monetary aid the resulting economic chaos will foster the level of desperation required for Westerners to accept global “solutions”. Watch what is actually done going forward, not what they say.

Agreed. The global slowdown is forcing policy makers’ hand. Either they ease big-time (as yesterday’s announcement of ECB bond buying indicates that Europe may do), in which case growth and inflation are their near-term goals. Or they wait and let the recession turn into a depression – which it will if not fought with more credit – implying that we’re being softened up for something even more dramatic.