A Trader and Economist go into a bar… 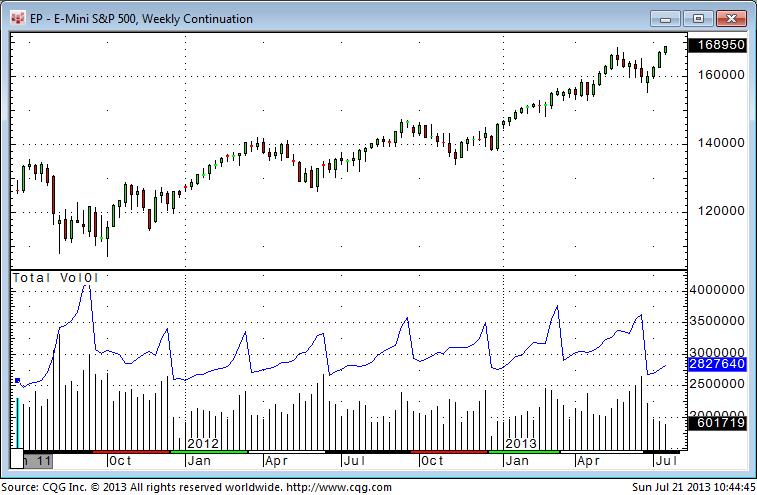 That last thought really got me thinking about the way I trade…I “know” that a market’s price is going to change…and I believe that all the research and analysis and thinking that I do gives me some idea about “why” it might change. I’m aware that I’m still tempted to guess “when” it might change…but I don’t need to “know” that…I can simply wait for the market to confirm that it’s changing…if indeed it is…before I put on a trade. To consider “how much” it might change I need a time frame…and hopefully I will use the same time frame for both my analysis and my trading!

I’ve traded futures and options since the mid-1970’s and I’ve learned a lot of things about trading the hard way. In hindsight, it seems I was also an incredibly slow learner…or simply too hard-headed to change when I needed to…I’ve noticed that as I’ve gotten older my “style” of trading has changed and I expect it will continue to change as I change and as markets change.

When I talk about trading I often describe myself as more of a “poet” than an “engineer”…but I still believe that it’s very important to have a defined method…to write down what I think about a market…and what I’m planning to do…and to later review what I wrote and see what I can learn from that.

My trading method is continually evolving…lately I’ve come up with the Acronym R.A.C.E.R. to describe my trading method. It stands for Research (all kinds of markets and relationships) Anticipate ( a potential trade) Confirmation (wait for the market to show me that the time is right to make the trade) Execute (make the trade) Risk management (contingency plans for what I will do if the trade isn’t working).

I need a defined trading method to protect myself, from myself…because I’m pre-disposed to making impulsive trading decisions…both to get into and out of a market. I watch markets closely and (sometimes) I have a pretty good “feel” for what’s happening…unfortunately impulsive trading hasn’t been a truly successful trading style for me…probably because it gets the time frame of my analysis badly out-of-sync with the time frame of my trading!

The S+P 500 stock index closed at new All Time Highs last week…this means that the May 22 high was NOT a Major Turn Date…that the decline from May 22 into June 24 was a “buy the dip” opportunity…indeed, Market Psychology changed dramatically on June 24 (when Bernanke “changed his tune”) and June 24 may turn out to be a Key Turn Date Up similar to Nov 16 last year (when the market decided that Abe was going to be the next Japanese PM.) I haven’t bought the current rally…in part because I’d been short during the decline from the May 22 highs and couldn’t “make a 180” to becoming bullish. I haven’t sold it short either, although I did “anticipate” that the rally off the June 24 lows would “peter out” and the market would roll over and make new lows…but there was no “confirmation” of  a roll over so I’ve just been on the sidelines. The relatively low volume the past three weeks doesn’t support a strong rally…although volume figures may be a little misleading given the recent front month contract rollover and the summer doldrums. I also note that last week American equity mutual funds received their highest weekly inflow of new cash since June 2008…in other words, retail players are piling into this market at ATH. This market looks like it wants to keep going higher and it has the Fed’s “accommodation” at its back…you have to think that die-hard shorts are also throwing in the towel! My Trading Theme for the US stock market is that it feels toppy… Market Psychology seems even more “What, me worry?” now than it was prior to the May 22 Turn Date. The Japanese Yen began a steep slide in November last year when Market Psychology determined that Abe was going to win the elections and begin to implement his aggressive policies to end two decades of deflation in Japan. This weekend he solidified his grip on power by winning a majority in the Upper House…this should clear the way for him to implement his policies…which “should” mean a weaker Yen and a stronger Japanese stock market. If that doesn’t happen then perhaps the majority election win was already factored into prices. My Trading Theme for currencies is that the USD is in the early stages of a multi-year bull market. Gold dropped $600 or ~30% from last fall’s highs to the three year lows made in June…where it generated a Monthly Capitulation Buy Alert (Ross Clarke, Institutional Advisors) for only the 4th time in the last 40 years. As previously noted in this blog I took a modest long position in gold in late June. So far, so good, but this looks like a corrective rally with heavy overhead resistance around $1350. Gold shares have also bounced from an extremely over-sold position…as has the ratio of gold shares to gold.  My trading theme for gold has been that the $1900 high in September 2011 would be THE high for a long time…but…I think this decline will find a bottom and we will eventually see new All Time Highs. Gold relative to the S+P 500: I’m keeping an eye on this chart…”anticipating” a possible buying opportunity…but a long way from seeing any kind of “confirmation” that the time is right to take a position. Gold has fallen over 50% against the S+P since August of 2011 (as gold fell and the S+P rallied) and the ratio is now at 5 year lows.  I can imagine a time (maybe before this year is out) when Market Psychology turns negative on the stock market and bullish on USD and gold! WTI Crude Oil: It’s interesting that WTI Crude is rallying as North American production of crude (and Nat Gas) is growing by leaps and bounds. Is this a Mid-East Geo-Political story? I watched Joe Petrowski, CEO of Gulf Oil, forecast $50 crude ahead due to rising supply. My Trading Theme for crude is that supply pressures prices lower. Futures and futures options are the best way to trade currencies, metals, stock indices and many other financial and commodity markets. Call 604 664 2842 to talk with a futures broker.