A Titanic Disaster…….Or What Will Be Blamed When Currencies Sink? 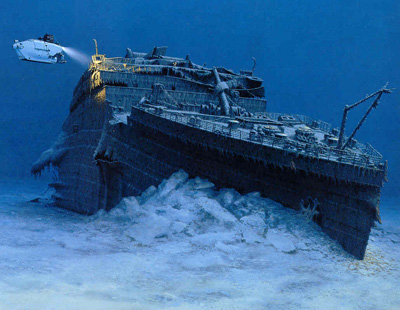 THE FIRST is a set of gold-rimmed eyeglasses. Further on, there is a pocket watch stopped at 11:14. Then there is a brown leather suitcase, somewhat worse for the wear. There are stacks of white dishes and racks of dark green bottles. Another display shows brass plumbing fixtures and a gray, steel wrench. And at another stop along the walk one sees a copper and glass engine thermometer. There is a jade rosary, and a man’s boulder hat, of all things, in remarkably fine condition, considering… And a pair of woman’s shoes, made of black leather. Not one shoe, but a pair, recovered from the sea floor beneath 12,000 feet of cold North Atlantic water.

Then there are the coins and paper currency. Gold coins, silver coins, copper. British, American, French. This was real money back then, from a gold standard era. And the paper notes also tell a tale. They are a collection of official British and American treasury promissory notes, and a remarkable amount of scrip from private banks, redeemable in precious metal.

Every note has an annotation at some spot or another, promising to pay to the bearer some quantity of gold or silver. “One Dollar Silver Note,” from a bank in New England, redeemable in an ounce of silver from that institution. Or a “Two Dollar Silver Certificate,” to be paid on demand by the Treasury of the United States of America in, not surprisingly, two ounces of silver. Or “Ten Gold Dollars,” half an ounce of yellow metal in 1912, promised by and intended to be paid to the bearer from the precious gold assets of the Government of the United States.

These artifact paper notes, recovered against all odds from their watery grave, still retain a certain sense of dignity. They do not declare mightily and officiously that they are “legal tender for all debts, public and private.” They do not have to… The notes represent a solemn promise by the issuer that, in return for a person lending a sum of honest money to the bank or government, the issuer of the note will repay an equal sum of precious metal at a time and place of mutual convenience. There is, it seems, a sense of financial humility, respect and national or corporate duty to these documents.

The Titanic exhibit explains that within about two years of the ship sinking, the British and American governments changed the methods by which they permitted currency to be issued. The exhibit does not go into detail, which is understandable. This is a display of artifacts from a sunken ship, not an exposition on monetary history. But it is interesting that the curators would mention it at all.

In late 1913 the US government enacted the Federal Reserve Act, which removed the power to issue monetary notes from private banks and the US Treasury, and gave that power to the newly established Federal Reserve, or the American central bank. And in 1914, Great Britain’s central bank, the Bank of England, went off the gold standard shortly after Britain entered into what became the Great War, now known as World War I.

For the 100 years before this time, the respective values of the British and US currency had held more-or-less steady, excepting a period of inflation during the American Civil War. But after 1914 the value of the respective currencies was set by… well, by a monetary system, for lack of a better term, run by each nation’s respective central bankers.

The idea was to have an “elastic currency,” meaning a currency base that could expand to meet the needs of a dynamic and growing economy, or in the case of Britain, to fight a war that the nation could not afford.

In the ninety or so years since those monetary milestones of 1913 and 1914, both the British pound and the US dollar have lost about 98% of their value due to inflation of the national monetary supplies. That sure makes for one heck of an “elastic currency”, eh?

But because this monetary debasement has happened so slowly — year by year, decade by decade, generation by generation — this decline of the value of national currency has seemed almost a natural phenomenon, an immutable law of nature. This is the way that monetary theory is taught in all of the best schools, and is how all modern monetary systems work, right?

Over the long term, the nominal savings of one generation are reduced, in the aggregate, to a pittance. This matters quite a bit when one goes to retire a generation or so after going to work. And in an inflationary environment, valuations of capital become meaningless over the long term, absent using statistical guesses to determine deflation factors.

From the standpoint of ethics, it would seem that the people who run the Federal Reserve and the Bank of England have a responsibility to their respective citizens to maintain a stable value to their currencies, and not to destroy that value over time. It would seem that the managers of a nation’s currency have a duty to maintain monetary standards, and not to wreck savings and impoverish one generation to benefit another. It would seem so, but apparently this is not how the monetary system works.

By way of comparison, this ethical duty to maintain standards is much the same as the duty of the principals of the White Star Line to design and build a fine ship, appropriate to the hazards of oceanic crossings. And this is much as Captain E.J. Smith had a duty to train his crew and sail his vessel along a track that would bring her safely into the port of destination. But on the night that the Titanic sank, there was a failure of duty by the Captain to sail a safe course, even after an ice warning was received over the radio. And the iceberg, scraping the rivet heads off the steel plating of the Titanic and permitting the sea to flood the ship through hundreds of small penetrations, revealed a flaw in construction. And the sinking revealed the failure of White Star Line fundamentally to design a proper ship, with lifeboats sufficient to the need of passengers and crew in a time of peril.

As fate would have it, J. Bruce Ismay, one of the directors of the White Star Line, survived the Titanic’s sinking by leaping into one of the last lifeboats that dropped from the doomed vessel into the freezing ocean. Later on, Director Ismay was greatly criticized from almost every quarter, because he survived the sinking when over 1,500 others did not. One of the most trenchant critiques of Ismay came from Admiral Alfred Thayer Mahan, the great historian, strategist and sea power visionary of the US Navy, who reviewed Ismay’s retreat to the lifeboats and his abandonment of hundreds to death by freezing and drowning, and wrote:

“We should be careful not to pervert standards. Witness the talk that the result is due to ‘the system.’ What is a system, except that which individuals have made it and keep it? Whatever weakens the sense of individual responsibility is harmful, and so likewise is all condonation of failure of the individual to meet his responsibility.”

What will the central bankers say in their own defense when the dollar, or the pound, vanishes like the Titanic beneath the sea? Will they simply shrug their shoulders and blame “the monetary system”? What will they say to those doomed souls who are the victims of their failure, and whose lives, communities, nations and cultures are shattered? What will they say as the wreckage of their monetary system slips away and rains down, like the artifacts from the Titanic landing on the dark abyssal plain far below?

Byron King,
for The Daily Reckoning Byron King is the managing editor of Outstanding Investments and Energy & Scarcity Investor. He is a Harvard-trained geologist who has traveled to every U.S. state and territory and six of the seven continents. He has conducted site visits to mineral deposits in 26 countries and deep-water oil fields in five oceans. This provides him with a unique perspective on the myriad of investment opportunities in energy and mineral exploration. He has been interviewed by dozens of major print and broadcast media outlets including The Financial Times, The Guardian, The Washington Post, MSN Money, MarketWatch, Fox Business News, and PBS Newshour.