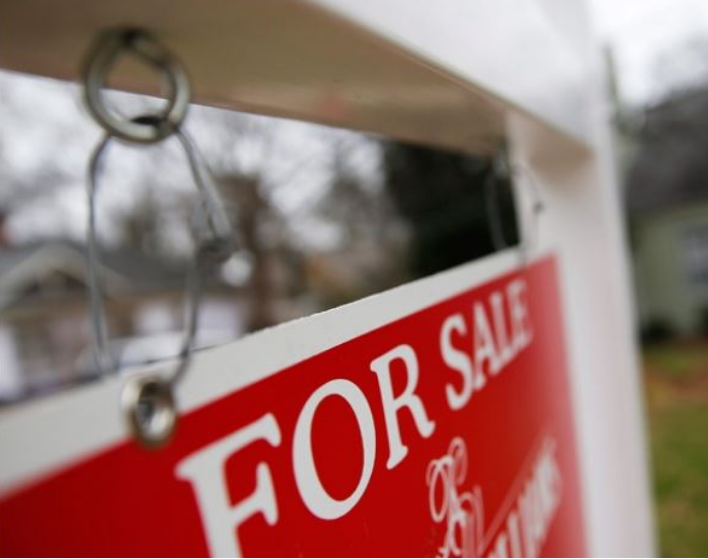 Greater Vancouver detached properties fails in the latest attempt to surpass the two million price barrier. Even as prices reach their highest point in history of $1.982M during June, the average sale price is barely above the aggressive uptrend. The pending break to the uptrend will result in a market reversal and the reemergence of price volatility. In addition to the pending trend reversal, the sales totals have greatly diminished from their recent all time highs experienced in March.

Another abating factor to future price increase is the rising inventory levels as homeowners look to reap the benefits of the sudden 24% increase to the average sales price over the past 12 months. Typically as home values increase, so do the listings. 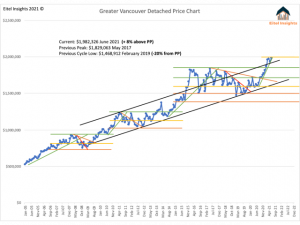 As the current uptrend comes to a likely end, home values will begin to consolidate their recent gains. The obvious question becomes how low will values go? Eitel Insights anticipates a tepid 8% – 10% correction to occur. That implies values to peak around the $2M barrier and will backtrack to $1.830M the previous market peak. There is a possibility that values take a sharper downturn, as the market did not accrue the $363,000 year over year increase based on natural market behaviour. Instead values were artificially boosted by historically low interest rates, the BoC bailing out the secondary mortgage market which in turn supported the banks and CMHC. This allowed the banks to offer mortgages to the sudden monumental spike of demand for detached properties born out of the pandemic. Should the average sales price break back into the previous market cycle below $1.830M, values would very likely find their bottom around $1.725M (-13%).

Even though average sale prices increased out of “unnatural” market factors, there is no mandate that says values will come back to their “rightful” values, if there is such a thing. Instead of values tumbling back to affordable prices, home sale prices are likely to take a temporary pause before the next major push higher. As evidenced by the last sudden 22% increase during June 2013 ($1.120M) to February 2014 ($1.367M). The rapid uptrend was unable to sustain itself for a prolonged period of time. After values peaked in Feb 2014, there was a correction of 13% by July 2014 ($1.184M), and home values did not surpass the 2014 price peak until the following February ($1.402M). While the 2014 break out was a false break, the following year of a market consolidation was the last opportunity to purchase before another major increase to $1.816M in January 2016. The resulting growth phase from July 2014 ($1.184M) to January 2016 was a substantial 53% increase .

Similarly, Eitel Insights anticipates a major price injection after the pending market lull. A market driven growth phase typically ranges from 40 – 56% price increase over the past 16 years. The conservative side of the range implies values could reach as high as $2.8M (41% increase) during the next growth cycle. The next growth cycle is likely to occur as immigration returns in a big way, including international investors. Rising interest rates will spur on another phase of FOMO as interest rates increase, the buyers will be eager to purchase before further escalation occurs. 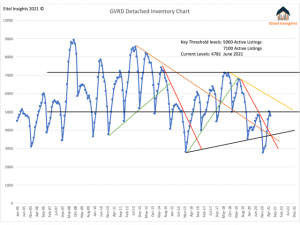 The reopening of interprovincial travel, and the lifting of covid restrictions undoubtedly had a negative effect on total inventory during June. June’s 4,781 active listings signalled the first decline since December 2020 with only 2,762 active listings, the lowest total on the chart. Equally important the current level of active listings is similar to the August 2020 peak inventory of 4,823.

Inventory levels have historically peaked during the summer months, however over the several years the trend has been for inventory to peak during August or September. This is likely to be the case for 2021, as potential sellers list with eyes towards selling their properties at peak values. 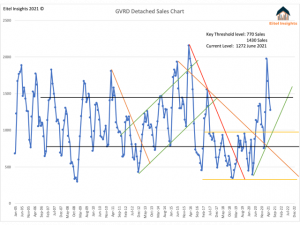 Sales have fallen back from their near term highs of 1,973 during March 2021, June finished with 1,272 completions. Well above the preceding three year sales channel of sub 950 sales in every month (2017 – 2020). With sales returning inside of the historical sales channel, the data will likely find support thanks to the upturned in the near term, as inventory levels have evolved to peak later in the year, so has the sales yearly peaks. As the inventory rises during the last summer and early fall, sales will likely take another leg higher, before dropping below the current uptrend during winter. 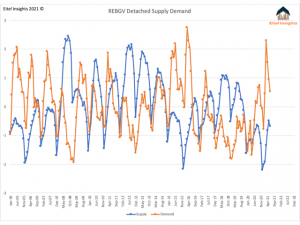 Not all areas inside of Greater Vancouver will react equally during the upcoming months. For individual area market analysis, or to become and Eitel Insights client contact us.