A Tale of Two Forecasts 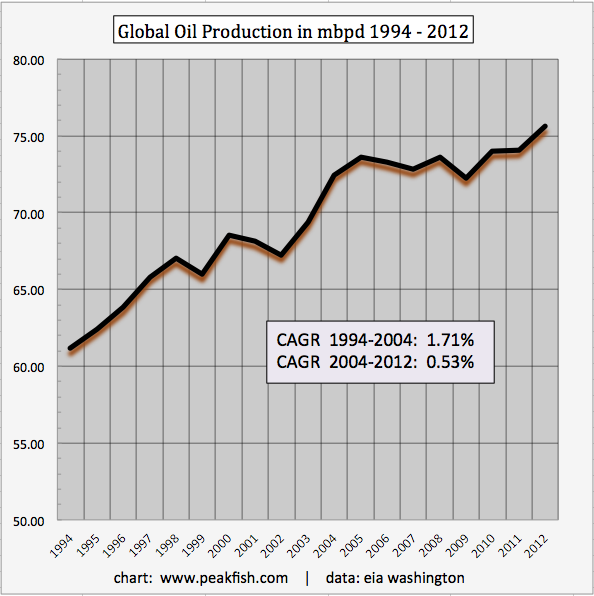 Where Has Objectivity Gone?

It was the best of times; it was the worst of times for the American public over the past month, as it was treated to two high-profile, but deeply conflicting, economic forecasts.

Despite declaring in 2008 that the age of cheap oil was over, the International Energy Agency (IEA) surprisingly announced last week that the United States would become the largest oil producer in the world by 2020. Hooray! This superlative declaration titillated US media organizations, who understand quite well that Americans love to secure a #1 ranking in just about any category (save for prison incarceration, divorce rates and obesity). As I explained to the Keiser Report, however, the IEA has done little more than produce an attention grabbing headline here. Simply ranking the “top oil producer” in 2020 may mean much less than the public currently understands.

This announcement has since led to the magical thinking that we can somehow take ownership of this future “extra oil” not eight years from now, but rather…. today. In other words, the additional 3 mbpd (million barrels per day) of crude oil and the 1 mbpd of NGL (natural gas liquids) that the IEA forecasts for 2020 have suddenly been booked into the “readily-available” column and are already being factored into US growth projections. That is premature, to say the very least.

In contrast to the IEA’s report was the grim outlook recently offered up by legendary investor Jeremy Grantham, of GMO in Boston. Mr. Grantham has been increasingly sounding the alarm on a future of significantly lower growth rates for some years now. It is rather obvious, as well, that Grantham has been methodically making his way through the reading list of resource scarcity scholarship over the past five years, taking in the views of everyone from Joseph Tainter to Jared Diamond. Combined with the available data, Mr. Grantham has come up with the rather unsurprising conclusion that the rate of future growth is set to be much lower than most anticipate. In Grantham’s view, there will be no return to normal growth as was enjoyed in the US in the post-war period (after 1945).

Reactions to Grantham were predictable. Has he lost his mind? And of course: Grantham goes Malthusian was another common refrain. Many of the media outlets covering Grantham’s letter, On the Road to Zero Growth (link to PDF here; free registration required at GMO website), also engaged in predictable reductio ad absurdum, claiming incorrectly that he was calling for the end of the world. Indeed, no such call by Grantham was made.

It leaves the rational observer wondering: Why is the media so breathless in its exultation of any optimistic forecast, no matter how poorly supported? And why does it vilify those who attempt to argue the other side?

Where has our objectivity gone?

Moreover, many were mistaken that Grantham has adopted an ethos of negativity or that he has become ideological in his views. Quite the contrary. He is working with the same data observed by many hedge funds, international organizations, and academic research that shows that, as we entered the past decade, the extraction and production rates of many critical resources began to slow – and slow significantly.

Just to kick off this discussion, let’s start with the master commodity, oil: In the ten years leading up to 2004, global crude oil supply grew at a compound annual growth rate (CAGR) of 1.71%. This rate of supply growth started during the strong economic phase during the 1990s, and only strengthened after the recession of 2000-2002 when countries like Russia came online with fresh oil supply.