A Strong Contrarian Signal This Market Is Toast 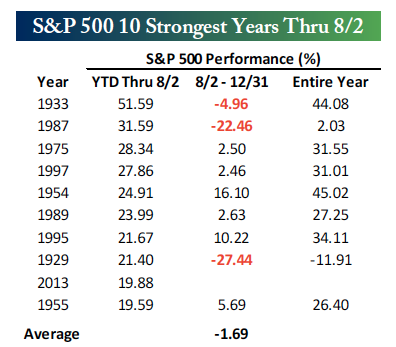 Still lazy hazy. Still crazy. And still not much action in the financial markets.

The Dow sold off a little on Friday. Gold went nowhere.

You’ve already heard our guess: Investors are marking time… waiting… procrastinating… maybe even thinking things over. The serious action won’t begin until summer ends. Then investors will return to their desks… and PANIC.

Panics are rare. Crashes are rare. And we’re not going predict something with small odds. Most likely, it won’t happen.

But sometimes you’re better off expecting something that never comes to pass. Because the importance of an event is a feature not just of its frequency… but also of its gravity.

You might, for example, feel like sending out photos of your crotch… or taking up with a beautiful young woman (a soul mate!) from Buenos Aires.

Can any dear reader honestly say he’s never considered doing such a thing? The odds of getting caught may be slim. It’s still better to think there’s a rat hiding behind every bush.

Because if you get nabbed, it can be a major bummer. Especially if you’re running for elective office. The newspapers might get ahold of it and make a big deal of it.

The Straight and Narrow

There are times for “out of the box” thinking and times to stay in the box. Most of the time, you’re better off in the box, keeping to the straight and narrow. That’s where most of life takes place.

And most of the time, the markets stay in the box too. No panics. No crashes. No bubbles.

BUT (and this is an all-caps “BUT”) as you get older, the odds of dying on any particular day increase. We checked the Social Security tables. A person born in 1948 has about 20 years to live – on average. But a person born in 1913 has barely 740 days to look forward to.

(So, too, do the odds of dying increase if you have a habit of drinking and driving – at the same time.)

And by the way, this market has a long history of behavioral problems. It’s addicted to easy credit. It hit bottom in 2000… and probably would have straightened up eventually. But the feds came in with more junk credit. In 2008 the market went into rehab. But the feds went to work on it again. They gave it even more credit on even easier terms.

At the time, investors, businessmen and householders all seemed to want to do the prudent thing – to cut back on their expenses and clean up their balance sheets. The feds put in place their zero interest rate policy in order to encourage them to take more risks.

Mom and Pop Dive In

The pros saw what was happening in 2009 and 2010. They knew the feds were ready to do “whatever it takes” to boost stock prices.

Stocks had fallen hard in the deleveraging crisis. The pros saw that (1) stocks weren’t expensive, and (2) the feds were determined to get prices up. So the pros bought.

Mom and Pop investors were slow to join the party… as always. They were burnt in 2000… and again in 2008. They were wary… cautious…

But now they’re back, says MarketWatch:

Data shows that the ordinary retail public – Mom and Pop – are back on Wall Street, and how! According to the Investment Company Institute, the Great American Public has poured $92 billion into the stock market via stock mutual funds since the start of the year.

Mom and Pop are great parents. They go to Little League games. They vote. They separate their trash and wear their seatbelts.

But good investors they ain’t. The idea is to buy low and sell high. Poor old Mom and Pop can’t seem to get it right. They buy high and sell low.

And now that stocks have been run up – by the Fed’s easy money policies – for five years, Mom and Pop can’t help themselves. They’re back in the stock market… ready to be skinned again.

Market Insight:
What Are the Chances of Another Market Crash?

From the Desk of Chris Hunter And on all but on occasion – in 1929 – the market saw gains for the calendar year.

Of course, the market didn’t have the tailwind of a $3.5 trillion Fed balance sheet in these previous nine bull runs.

The S&P 500 has shown a roughly 90% correlation since the March 2009 low with increases in the Fed bond buying. That’s more than the correlation between stocks and earnings – which have historically determined prices… and which will someday determine prices again.

In a world where the end of Fed bond buying is now being openly discussed, a market that has moved dollar for dollar with Fed policy is vulnerable to say the least.

There’s no guarantee that 2013 will see a repeat of 1929 and 1987. But as Bill says, “The importance of an event is not a just feature of its frequency… but also of its gravity.”

Keep some cash onboard. It may come in handy soon.