A Reversal In Several Big Trends 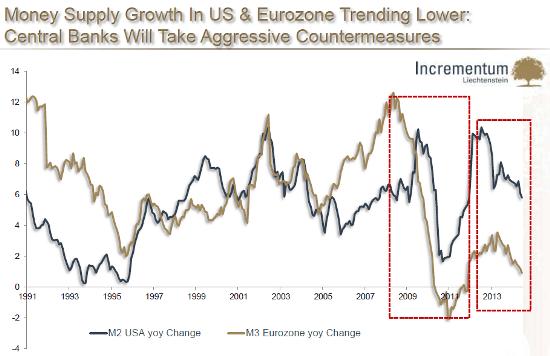 Taki Tsaklanos over at GoldSilverWorlds has reprinted a series of charts fromIncrementum Lichtenstein that show a reversal in several big trends. Here are a couple of them, followed by some other supporting material.

First, US banks have not only failed to return to their pre-2008 pace of lending, but the loan growth rate is now falling back towards zero. In other words, the trillions of dollars pumped into the banking system by the Fed in recent years don’t seem to have worked: Along the same lines, after the 2008 crash growth in the money supply spiked in the US and recovered modestly in Europe. But both trends are now declining:

To see what this means for the weakest links in the global finance chain, here’s a chart from Mike Shedlock showing how pretty much all the new credit being created in Spain is by the government, while private sector activity continues to contract. In November, Spain’s youth unemployment rate exceeded that of Greece:

“Spain saw its youth unemployment rate rise to a staggering 57.7% in November as the country registered the worse youth jobless rate in the eurozone area.

Eurostat, the statistical information arm of the European Union, also revealed the youth unemployment rate across the eurozone remained steady at 24.2% for the second consecutive month – meaning there were 3.5 million unemployed under-25s across the region.

“There is a real danger that these young people will get trapped in the ranks of the long-term unemployed,” James Howat, a European economist at Capital Economics, told IBTimes UK.

What does all this mean? Maybe that 2014 will be a year in which Europe leads the global economy back into recession, people start focusing on how deflation makes life even harder for debtors, and pressure builds for the European Central Bank to board the QE train. The Fed, meanwhile, will find it hard to justify more tapering with big parts of Europe on the brink of explosion (an inevitable result of 50+% youth unemployment) and will be forced to reverse course sooner rather than later.

So the question becomes one of interpretation. Do equity and other financial markets freak out over incipient deflation or soar in anticipation of global, unending debt monetization? Or one then the other?

However it plays out, fundamentals will likely take a back seat to perception and manipulation, which is, for a while longer, the way of the world.