A Look at NYSE Margin Debt and the Market 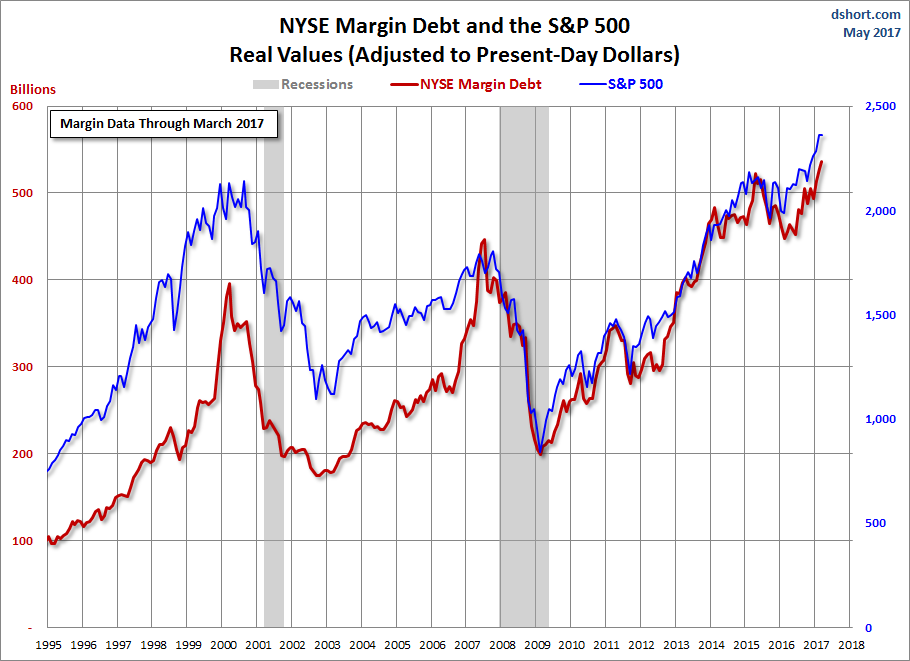 The New York Stock Exchange publishes end-of-month data for margin debt on the NYX data website, where we can also find historical data back to 1959. Let’s examine the numbers and study the relationship between margin debt and the market, using the S&P 500 as the surrogate for the latter.

The first chart shows the two series in real terms — adjusted for inflation to today’s dollar using the Consumer Price Index as the deflator. At the 1995 start date, we were well into the Boomer Bull Market that began in 1982 and approaching the start of the Tech Bubble that shaped investor sentiment during the second half of the decade. The astonishing surge in leverage in late 1999 peaked in March 2000, the same month that the S&P 500 hit its all-time daily high, although the highest monthly close for that year was five months later in August. A similar surge began in 2006, peaking in July 2007, three months before the market peak.

Debt hit a trough in February 2009, a month before the March market bottom. It then began another major cycle of increase.

The NYSE has released new data for margin debt, now available through March. The latest debt level is up 1.7% month-over-month. The current level is at another record high. Note the inflation-adjusted version is also at its record high. The March data gives us an additional sense of investor behavior since the start of the new administration.