A Giant is Waking, With Humongous Profits Ahead 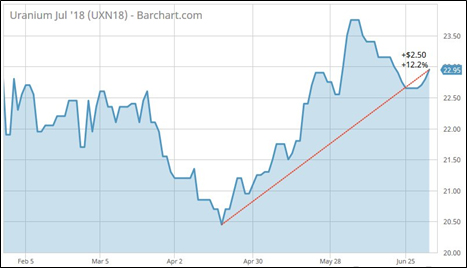 Man, I love catching a big move early. And there’s a metal that is just making a turn out of a long, brutal bear market right now.

It’s not gold. It’s not platinum. Nope, this metal glows in the dark.

It is still moving slowly, like a giant rousing from a deep slumber. Investors who hop aboard this giant now stand to make humongous profits.

Uranium has rallied more than 12% from a low it hit in April. You might remember that was when I started pounding the table about this white-hot energy metal. Is that the end of this rally? Heck, no! As this longer-term chart shows, uranium can get a lot more expensive, and in a hurry, too. I expect uranium could rise to $40 a pound in a hurry. And from there, well … this sizzling metal did soar to over $140 a pound in the last bull market.

BLAM! Did that get your attention? And why is uranium so cheap, anyway?

Well, commodities are cyclical. The last great uranium bull market ended in 2008. I should know. I made my subscribers a heck of a lot of money in that magnificent bull run.

Still, uranium prices were pretty good. That is, until 2011, when an earthquake and tsunami in Fukushima, Japan, sent three reactors into meltdown. That pushed uranium off a cliff. For a very long time.

The price of uranium went up 17% in 2017. That’s the first time the needle moved in years.

That’s only the third time uranium prices have gone higher in the past decade.

And this year? This year, the uranium market is looking to be really hot. White-hot!

Why is that? Well, there’s the fact that one miner after another has shut down production because it’s literally cheaper to buy uranium on the spot market than it is to mine it.

That’s a huge disconnect. It was only made possible because Japan’s idled reactors were selling their fuel reserves into the market. Now, Japan is turning reactors back on. It recently restarted its eighth reactor and is looking at bringing a bunch more back online.

That’s a major shift in the fundamentals.

But let’s look at the global picture. Now, there are 450 reactors in operation. Another 57 are under construction. Most of them are in Asia. Another 154 are on order or planned, and a further 284 proposed.

You need about 200 metric tons of uranium to run a typical 1,000-megawatt (MW) reactor for a year, and about twice that to start one up.

Globally, there are about 395,000 MWs of nuclear power installed. That means we need around 79 million metric tons a year of uranium.

The supply from mines, currently, is straining to meet this. About 65 million tons of uranium was mined in 2017. The rest is met from stockpiles.

But then there are all those new reactors I mentioned. The new reactors that are under construction will produce another 62,000 MWs of power. And that will require 12.4 million more metric tons of uranium per year.

And if we add in all the nuclear power plants on order or planned — that’s another 31.6 million metric tons of uranium required every year.

To be sure, nuclear power plants can’t run forever. And bears will point out that the U.S. has an aging nuclear fleet, and isn’t planning to build many more.

But I’ll counter that with the fact that operating licenses for those old plants keep getting extended. That’s because nuclear power is cheap. Very cheap. And it’s needed as a backup for the next generation of sun and wind power, and more.

Now let’s add in the fact that there is a very tiny universe of only about 40 uranium producers, developers, and explorers. More will grab picks and shovels, sure. But right now, it’s like shooting fish in a barrel.

The white-shoe crowd on Wall Street is sleep-walking as the uranium giant rises from its slumber. The stampeded will begin soon enough.

If you’re doing it on your own, please be careful, and do your own due diligence. But don’t miss this extraordinary rally to come.