A Critical 90 Day Window – Something is Burning in High Yield Corporates! 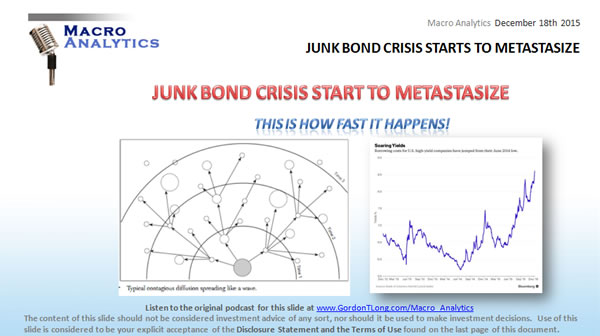 John Rubino and Gordon T Long discuss the alarming developments in the Junk (HY) Bond market. John was warning on his last appearance on Macro Analytics about the things he was seeing, while Gord was warning of a turn he was seeing in the Credit Cycle. Both previous observations have proven correct so John and Gordon postulate what to expect next. It isn’t pretty!

Since the Financial Crisis the US Federal Reserve has increased its balance sheet by approximately $3.5 Trillion. In this same period the Junk Bond (HY) issuers have issued $2.2T of debt which the markets have ‘gobbled’ up to achieve yield. The question is what happens if they start selling some of that debt to avoid capital losses. This problem is compounded by regulations since the financial crisis which has significantly curtailed banks making markets in these instruments. Many worry that Investment Grade (IG) bonds also issued over the same period will be “infected”, especially with a historic $1.3T being sold for the first time in 2015 to significantly fund stock buybacks and dividend payouts. This is a ‘witch’s brew’ for a potential disaster. With Corporate Leverage back to the point at which past default cycles started kicking in, there are more reasons to worry, as corporate cash flow and EBITDA fall while the Federal Reserve raises rates.

Worsening cash flow to debt ratios normally force credit downgrades making credit more expensive and harder to get. This is coming at a time when major Junk Bond issuers in the Energy and Commodity sector are being hardest hit by falling pricing. They are trapped and investors know this and are now worried about junk bond liquidity.

John and Gord both see a steadily deteriorating global economy which will bring further pressures to an already troubling situtation.

John lays out the torrent of bad news coming as the Fed begins raising rates:

The question is whether the Fed will be able to follow through with its stated policy direction. The problems in the Junk Bond market are not isolated to just the hard hit commodity and energy sectors. The protracted period of “easy money” created by Fed policy has sowed its seeds across all economic sectors. The next 90 days are going to be both quite worrying to investors and highly volatile for the financial markets, as the Credit Cycle, Rate Cycle and Business Cycle all send confusing signals before the future economic direction becomes clear.

Let’s all hope that is not spelled: “Recession”.

…. there is much, much more in this comprehensive 31 minute video discussion.