A Bottom Yet? Not Even Close … 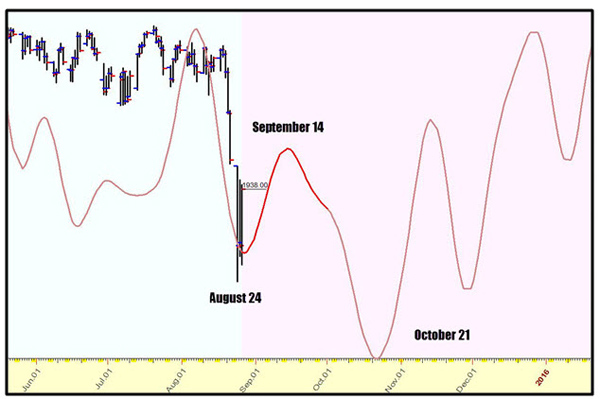 Is it over? Will the stock market now make a beeline back to the highs, then on to new record highs?

Not yet! The long-awaited correction, according to my models, is far from over. Yes, we may see the dust settle for a few more days. We may even see more strong spikes higher.

But my work tells me there is much danger on the horizon, and the Dow Industrials have not yet bottomed. Not even close. Nor have the other major indices such as the Dow Transports, the S&P 500, the Nasdaq.

Nor has Europe bottomed. Or Asia.

So don’t be deceived if you see some rallies. Don’t let your stockbroker load you up on stocks, of any kind.

Instead, mark my words: The time to buy is not yet here. In the weeks ahead, you will see … How sure am I? In this business, it’s a rare exception when someone can be 100% sure.

But if I had to rate the odds of new lows ahead for stocks, I’d say they’re better than 90%.

FIRST, is this cycle forecast chart for the Dow Industrials. It’s the type of cycle forecast I frequently show members of my Supercycle Trader, who actively speculate in the markets per my specifically chosen and timed recommendations.

And who also just bagged a sweet 121% gain on a bearish position in stocks, more than doubling their money, in just one week!

As you can see from this chart, which is based on billions of calculations of stock market data via an artificial intelligence model or neural net …

After a brief stabilizing period and bounce (red line) into the middle of this month, the stock market is likely to nosedive into the third week of October.

SECOND, is Europe. My models show similar patterns for virtually all stock markets in Europe. Some stabilization and a possible bounce into the middle of this month, then a collapse.

Moreover, Europe’s economic data is far worse than the lackluster data on the U.S. economy. Deflation is worsening in Europe. Industrial production is sliding. Consumer confidence is near lows.

And all the policies that have made Europe such a basket case in the first place — including a hair brained single currency experiment — continue to squeeze the European Union as if it were in a vice with a one way screw that can only be further tightened by insane leaders.

THIRD, is Asia. Long-term, Asia, including China, is fine. But my work tells me the markets there too have not yet bottomed. But keep an eye on them, for when they do bottom — especially China — they will likely bottom ahead of Western markets.

Why? Because in a very real sense today, Asia — especially China — leads the world.

There are many more reasons why I believe stock markets have not yet bottomed.

So here’s what I strongly suggest:

A. If you own any stocks, with the exception of specifically selected ones you plan to own longer-term, just get out. If you cannot get out, then hedge your holdings via an inverse ETF such as the ProShares Short Dow30, symbol DOG.

B. Do not — I repeat — do not go bottom fishing. In any sector. It makes no sense to bottom fish stocks that have already lost, say 30% or more, when they can easily lose another 30% or more.

C. Build your cash so that you can deploy it at the right time, near or at the bottom of the correction …

Fully keeping in mind that the long-term bull market in stocks is still intact — and that over the next couple of years the Dow Industrials can easily stage a slingshot move back up and more than double to over 31,000. Ditto for other major U.S. broad market indices.

And all on the backbone of frightened capital rushing out of the collapsing  cancerous debts of the doomed-to-fail Western socialist-style economies of Europe and Japan.

Washington will collapse too, but not for a couple of years. So make hay of it while you can, just like my Supercycle Trader members are starting to do.