A Better Way Than “Buy and Hold” 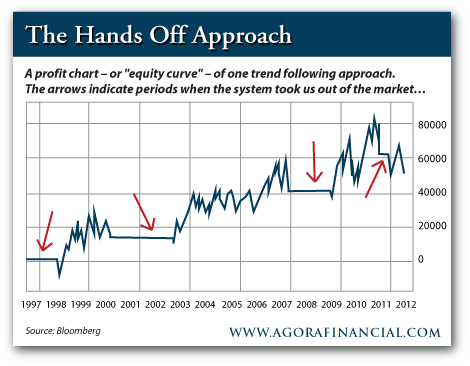 In the late 1950s, John Bogle changed the investing world.

Bogle became the chief advocate for index investing, a strategy based around the idea that investors should stop trying to pick individual stocks, quit buying mutual funds, and just buy the big stock indexes.

Why would an investor take such a hands-off approach? Bogle cited research that proved that most actively managed mutual funds don’t beat the market — and on top of that, they charged hefty management fees for their mediocre performance. The data was damning, and Bogle’s fund, the Vanguard 500 Fund, became one of the most popular investment funds in history, today worth more than $26 billion.

The Vanguard 500 fund doesn’t pick stocks. Its managers don’t have opinions on which indexes are best. It just tries to mirror the S&P 500 Index as closely as possible. And it does it for a tiny management fee.

Today, there are scores of index funds and ETFs that mirror all sorts of different market indices. If you want to buy “the market” or “stocks in general,” just plow some cash into one of the funds. Passive, hands-off investing has become the norm for scores of investors in the last five decades, becoming the “buy and hold” strategy that most people know about.

So, if passive index investing is so great, why would you ever want to pick a stock again? Well, it’s because the hands-off, buy and hold approach isn’t so great after all.

Today, I want to bust some myths about everyone’s favorite way to invest…

For starters, there’s no such thing as a “buy and hold forever” approach (no matter what certain octogenarian billionaires in Omaha may claim). That’s because everyone who’s ever tried it is broke.

Even though everyone in the industry calls index investing “passive,” there’s really nothing passive about it. The Dow, the S&P, the Russell — they’re all active investment strategies. Don’t follow?

Of all of the stocks that were part of the original Dow Jones Industrial Average, only General Electric is still a part of the index. All told, the index has changed 48 times since it was created — all of those changes being picked by the editors of The Wall Street Journal. That means that the Dow is, in fact, an active stock-picking index.

It’s how they unloaded garbage names like Kodak, Chrysler, and Woolworth when they hit the skids…

The S&P 500 is no different. S&P components are picked by a committee at Standard & Poor’s, who try to make the index mirror the 500 biggest stocks on the market. Since the rules on who makes it into the S&P 500 are largely based on who’s the biggest, stocks that fall get tossed out, and stocks that increase in value get added. So, in other words, the S&P committee is selling the losers and buying the winners. It’s the very reason why Apple (NASDAQ:AAPL) is a bigger chunk of the S&P 500 now, and Enron isn’t. We’ll get back to that in a minute.

The bottom line is this: passive investing doesn’t spare investors from the risks of stock picking. It just takes the stock picking off of portfolio managers’ plates and leaves it up to Dow and S&P. Clearly, that hasn’t worked very well lately. In the last 12 years, for example, the S&P 500 has actually lost just over 2%. So much for “buy and hold” always working out in the long-term.

But there is a different way to invest — a better way…

The key is in that phrase I mentioned from the S&P: selling losers and buying winners. It’s ironic, but the most successful long-term strategy any fundamental investor can point out is in essence a technical approach known as “trend following”.

The main idea behind trend following is simple: the market moves in big, long-term trends, and if you can identify them, you can ride them. It’s an approach that some of the most successful investors in history have used — and one you can use too.

Trend following can also avoid the pitfalls that index investors have struggled with over the past few years. You see, the S&P’s approach to trend following is crude at best. Since correlations between stocks in the S&P are very high, it’s not as effective at reducing risk as it could be. That’s why a purpose-built trend following approach makes so much more sense than all of this buy-and-hold brouhaha.

Today, we’ll construct a quick one.

If you’re familiar with “technical analysis” at all, you’ve probably heard of a moving average. In short, it’s the average price of a stock over a set number of days. A moving average is a stellar indicator of trend — if it’s moving steadily higher, then we know that a stock is generally moving higher over the time period that we’ve set. More importantly, we can define moving averages mathematically, so, we’ll go ahead and use a moving average as our “trend indicator”.

For simplicity’s sake, we’ll apply it to just one investment: the SPDR S&P 500 ETF (NYSE:SPY).

So, how would that simple strategy have fared over the last fifteen years? The chart below shows the hypothetical profit and loss of sitting back and letting that simple system trade for you: All told, you’d end up with gains of 74.3% — nearly double the 40% and change that a buy and hold approach would have earned you. But there’s an even more exciting story there…

See the handful of flat lines (with red arrows pointing to them) over that period? Those are the times you’re out of the market because the system said “sell”. So you didn’t touch stocks for almost 2 years while the tech bubble was bursting, and you were out of the market for all of 2008! I think you can see just how dramatically this system reduced the risks of being an investor.

Because despite that “hands off” approach to investing, you still beat the market by a wide margin.

Remember, the rules we just made up are crude. By adding some extra simple short selling rules to the approach, our trend following system could have upped its total profits to 80.8%, and actually made substantial profits when the floor was falling out for everyone else in 2008.

Our crude trend following system produced a chart that’s hard to believe, especially when you consider the fact that it includes two of the biggest market crashes in most investors’ memories.

There’s a lot an investor can do to improve performance beyond what I’ve shown you here — adding individual stocks, more complex rules, or introducing statistical optimization are all things that can easily improve returns under a trend following system.

But the key here is the fact that following trends (and not trying to predict them) can fuel some incredible returns while smashing risks much lower than you’d see from a “buy and hold” approach.

Jonas Elmerraji, CMT, is the co-editor of STORM Signals and Penny Stock Fortunes, and a contributor to Agora Financial’s Trend Playbook. Jonas got his start on the fundamental side of the market, poring over financial statements and valuations to find sound investments – today, he specializes in blending fundamental and technical analysis. Jonas is a senior contributor to TheStreet.com, and has been featured as an investment expert in Forbes, Investors Business Daily, and CNBC.com among others.

Jonas holds a degree in financial economics from UMBC and the Chartered Market Technician designation.