90% of Traders are Always Wrong at Major Turns 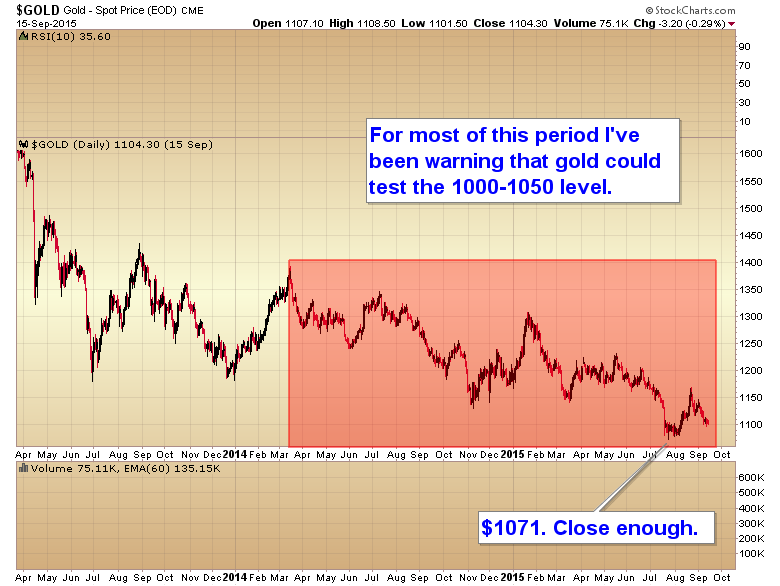 For about the last year and a half I’ve been warning that gold was being driven down to test the last C-wave top ($1033). No one believed me. Now that the test has occurred it’s time to go the other way. Again no one believes me. Traders have become so conditioned to gold going down they can’t envision any scenario where it could possibly go up. And that is exactly the kind of sentiment that occurs at major trend changes. We saw the exact opposite sentiment at the stock market top several months ago. Right when I was warning everyone that the market was going to crash.

I’ve covered extensively the 3 year cycle low that is due in commodities this year, and posted numerous charts showing how I think it occurred last month. If the CRB has formed a major 3 year cycle low then I don’t expect gold would diverge from the rest of the commodity complex, and in fact it looks to me like gold bottomed about a month ahead of the general CRB. With all the talk of deflation bonds have been signalling inflation for almost 8 months now, but no one is paying attention. Folks it’s time for some of the inflation that has been pouring into global stock markets for the last 6 years to start leaking out and moving into the commodity markets.

With gold confirming its daily cycle low today, and that low occurring well above the intermediate cycle low of July 24th, the metals are set up for a barn burner rally. And don’t forget that sentiment during the move down into the DCL has dropped all the way back to 13% bulls even though gold didn’t make a lower low. That’s means there it lots and lots of fuel to drive a very big rally during this second daily cycle.

This is your chance to get on board on virtually day 1 of a new daily cycle, and probably day one of a new cyclical bull market. If you are determined to be one of the 90% that are always on the wrong side of the market at major turns then just ignore this article. If on the other hand you want to change the old destructive habits and buy low for once then now is your chance.

And I’ll even sweeten the deal. Anyone who buys a yearly subscription to the SMT over the next 3 days I will refund your subscription price if miners don’t deliver at least a 20% rally over the next 2 months. ( I expect it will be double or triple that.) You could take $1000 and buy GDX and if you don’t have at least $1200 in 2 months then I’ll refund your purchase price back to you. That’s how strongly I feel that we are at a major inflection point right now. And I want as many people as possible to seize the opportunity before it passes.