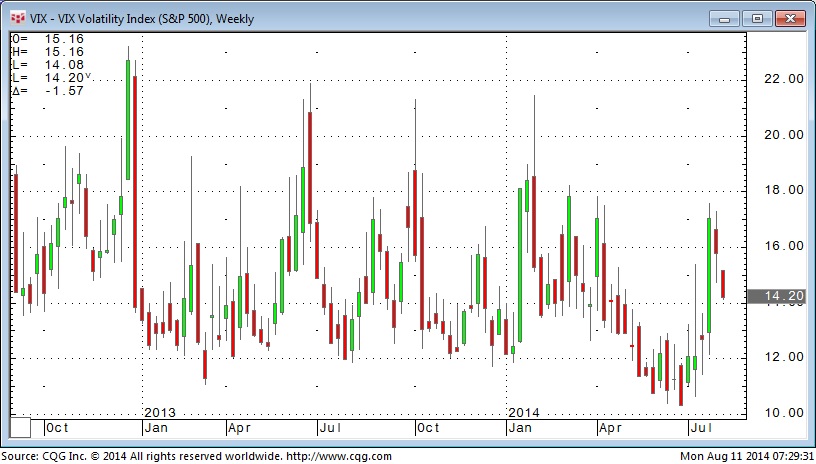 For the past couple of months we’ve been warning that bullish Market Psychology was getting way overdone and that investors should get defensive…we’ve been expecting a shift from “Risk-On” to “Risk-off.” When asked, “What is the biggest mistake investors are making at this time?” We answered, “Reaching for yield!”

We thought the shift in risk attitudes would be caused by:

We thought the “turn” in Market Psychology would cause:

1) A rising US Dollar: it traded at 2 year lows in early May…it rallied to 11 month highs last week,
2) Widening credit spreads: they began to widen at the beginning of July…then widened sharply the second half of the month,
3) A fall in the stock market: the DJIA and the S+P traded to all-time highs by mid-July…then fell ~5% to Thursday’s over-night lows.

Last week we used the term “Risk happens fast” to describe the sharp sell-off in the stock market. Another example of “Risk happens fast” is the huge move in the Vix…the Fear Index. In early July option volatility across markets was near All Time Lows with the VIX at 10.25%…2 weeks later it was over 17%…a 70% jump. (To put this in perspective the market isn’t “really scared” until this index is at 30% or more….during the panic of late 2008 the VIX traded at life-time highs above 90%. Top quality long-dated bonds have been a magnet for capital in 2014 even with yields near historical lows…Smart Money has been getting defensive, returning “to the center”…reducing leverage and looking for safety. While the leading US stock market indices fell ~5% the DAX (the principle German Index) fell ~10%. The US Dollar continues to rally. Mario Draghi (ECB head) appears to want a weaker Euro…the currency wars continue…in a deflationary environment there is a strong temptation to “gain market share” with a cheaper currency! The Euro fell to a 9 month low last week…but bounced Friday as the “relief rally” rippled across all markets. The 5 year rally off the 2009 lows has created tremendous buying momentum…traders have time-and-again been rewarded…BIG TIME…for buying the dip…BUT…we think the very rare July Monthly Key Reversal Down in the DJIA signaled a KEY turn in Market Psychology (reinforced by the rising US Dollar and widening credit spreads)…BUT…we wouldn’t be surprised to see a bounce from Thursday’s lows. From our short term trading perspective we’d look for that bounce to fail to make new highs…and then we’d look to re-establish short positions. We’d also not be surprised to see the Friday rally as a “one day wonder” and the market continue to sell off if/when Geo-Political Stress escalates.

We remain long the US Dollar in our short term trading accounts. We expect European currencies to weaken sharply into year-end. We continue to hold ~30% of our net worth in US Dollars as a long term currency diversification away from the Canadian Dollar. We were lucky to be “in the right place at the right time” when the Canadian Dollar rallied (actually when the US Dollar fell) from 2002 to 2008, and then again from 2009 to 2011. We decided to “take some money off the table” and converted ~30% of our net worth to US Dollars at an average of around par. We live and pay our bills in Canada so we have 70% of our net assets in CAD…BUT…we like the currency diversification idea.