6 wealth-building strategies of the rich anyone can use 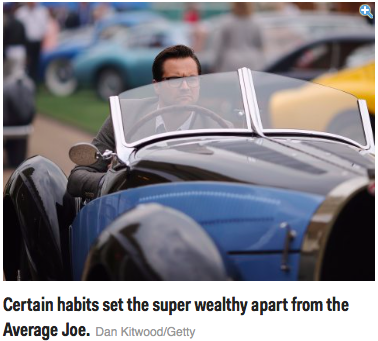 Several years ago, New York Times Wealth Matters columnist Paul Sullivan opened up his finances to a group of high-powered, high-net worth investors known as Tiger 21.

Members gather regularly to discuss investing strategies and at one meeting, Sullivan asked them to critique his own — relatively meager by their standards — financial life.

“Given what I do, I thought [my wife and I] had a handle on it, but what I learned from that meeting is that we hadn’t thought enough about the risks in life,” Sullivan says.

Those risks include declining incomes and the unexpected death or disability of a household wage earner. As a result of that meeting, Sullivan and his wife took out life and disability insurance policies and sold off a condo in Florida that had been a vacation home for the family.

“They were so direct and harsh about that being a possible drain, if we weren’t able to sell it if something bad happened. That was a wake-up call,” Sullivan says.

The lessons he absorbed from that wealthy, exclusive group of over 300 members across the U.S. and Canada led Sullivan to write his new book, “The Thin Green Line: The Money Secrets of the Super Wealthy.” The title refers to the security that can come from knowing you’re prepared for a negative event, like a layoff, no matter how much money you have or earn. “The people in the book who I call wealthy, whether they’re a teacher or a hedge fund manager, are wealthy because they have security. They have behaviors around money that let them be in control of their lives when something bad happens,” he says.

Those behaviors, Sullivan says, can be learned or even adopted later in life. As someone who grew up without much money, he says it took him a long time to have a healthy relationship with it. He would avoid credit card debt and overspending so assiduously that he often wore threadbare clothing and skipped even affordable purchases he would have enjoyed. “You should be able to spend money on things you enjoy. If you love $4 Starbucks lattes, then buy it,” he says.

If you’re looking to adopt some secrets of the wealthy, Sullivan suggests the following strategies:

Investing For Maximum Profits During A New US Presidency