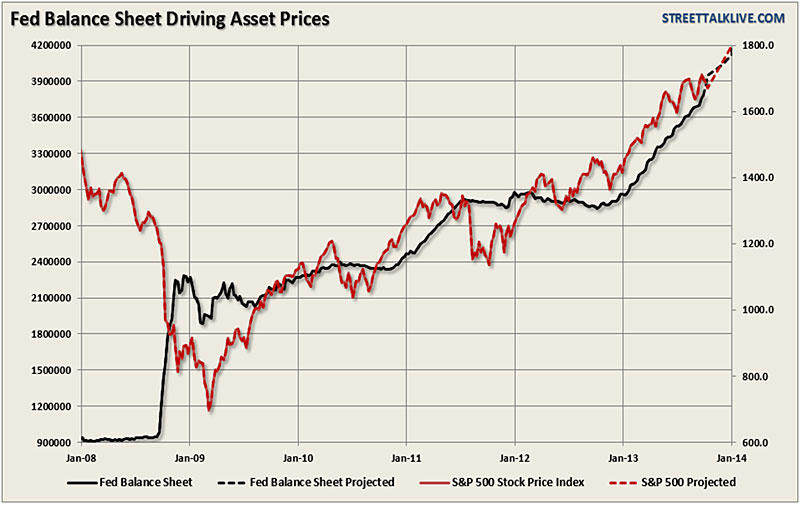 What a difference a few weeks can make.

All eyes were anxiously watching the Federal Reserve in mid-September. The key question on every investor’s mind: Would they or wouldn’t they? (Taper quantitative easing, that is.)

The S&P 500 Index had recorded its largest monthly drop in 15 months in August. But the Fed surprised investors by keeping the current pace of $85 billion in monthly bond purchases.

Today the benchmark index is at a record, having jumped 24 percent this year, the best performance since 2003. Yes, investor sentiment has shifted dramatically.

Not only is tapering no longer the worry of the day, but apparently it’s not even on the horizon. Most commentary and analysis I’m reading has pushed the start of reducing the stimulus program well into 2014.

The government shutdown and prospect for continuing budget battles early next year has a lot to do with the shift in consensus. And the jobless rate, a key indicator for the Fed, is still too high. (The government finally got around to releasing it – 7.2 percent in September compared with 7.3 percent in August.) As the graph above shows, there’s a strong tie between the size of the Fed’s balance sheet and the stock market’s rise. Ever since the Fed’s first round of QE in 2009, and with each successive expansion, the S&P 500 has responded almost in lock-step.

The no-taper relief rally has been accompanied by a shift in stock-market leadership, which I pointed out several weeks ago. Specifically, the risk-on trade is back, featuring outperformance by economically sensitive assets that are considered riskier, including:

1. Cyclical stocks and sectors, such as basic materials, technology and industrials.

The good news: You don’t have to invest in foreign stocks or international ETFs to tap into this potential. Instead, you can “go global” by investing locally by focusing on sectors or stocks that earn a substantial share of sales from abroad. When the line is rising from the lower left to the upper right, it means cyclical stocks (materials, energy, technology, industrials, consumer discretionary and financials) have the upper hand over defensive stocks (consumer staples, health care, telecommunications and utilities).

The reason: A downshift in global growth is stabilizing, and there are signs of improvement overseas. Over the past three months, global manufacturing expanded in 27 of the 33 largest economies. That’s a bullish sign for cyclical stocks. The table above lists the performance by sector since the end of June. It’s no surprise that nearly all of the top-performing stocks and industries also have the highest percentage of foreign sales — they stand to benefit most as global growth re-accelerates.

– Technology, for instance, generates 40 percent of sales from overseas markets. It’s the second-best-performing sector since June, up 14 percent.

– Materials is trailing, yet with 30 percent of sales from overseas, the sector has been playing catch-up, with a gain of 14.7 percent since July 1.

In the third quarter, materials and technology companies have reported the biggest upside earnings surprises compared with estimates (26.8 percent and 12.3 percent, respectively), according to FactSet Research.

I’ll be keeping an eye on these trends as earnings season progresses, and you should too. The shift in market leadership toward cyclical stocks, if it’s sustainable, may have a long way to go. And there are plenty of attractive technology, energy and materials stocks to choose from today.

Make sure to go to our Money and Markets’ Facebook page for a review of two undervalued cyclical stocks I’m looking at.