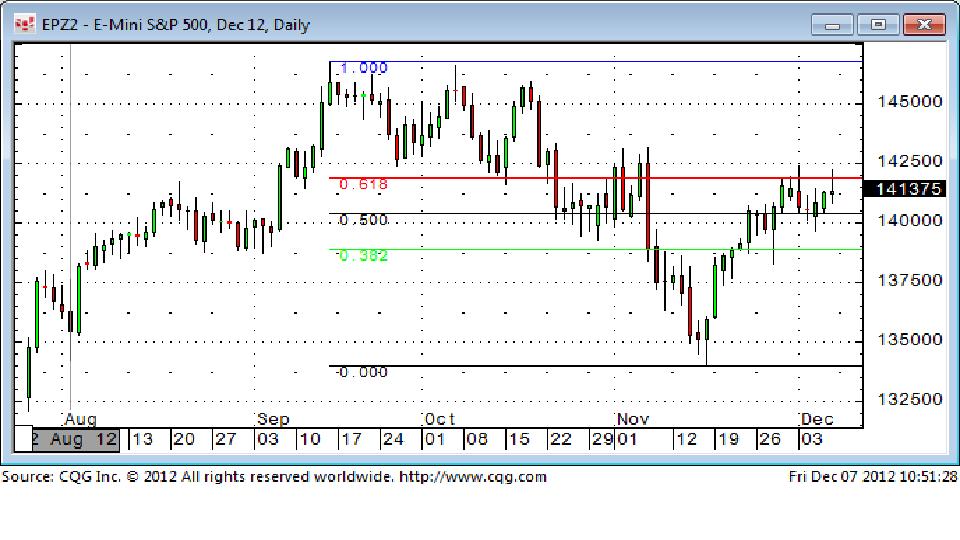 Looking for direction – I’ll start this week’s blog by commenting on a few short-term charts…trying to make some sense out of the recent choppy price action…and then give you my brief cynical assessment of the Great Socialist Demand for anything that’s not nailed down…as they try to buy time…try to escape the inevitable consequences that come from the deleveraging of a broken consumption-driven, credit-drunk society in a post credit bubble collapse.

The S+P had a Key Turn Date on Sept 14 and traded down until Nov 16 when a few (optimistic?) words from Boehner turned the market higher. I’ve thought that the rally from the Nov 16 lows was a correction to the downtrend that began at the Sept highs…but a break above 1425 – 1432 (perhaps on some more optimism about the fiscal cliff) would likely lead to a challenge of the Sept highs…at least. If the market advance stalls below 1425 and then drops back below 1383 my guess is that we’re probably headed for 1300 or lower by early 2013. The bond market didn’t like today’s (Dec 7th)  employment report…and a failure here…below the Nov highs…would look bearish…especially if we take out the recent lows around 14810. Gold had a tough week last week…on Nov 28 it broke hard on record high volume…I thought taking out 1700 might lead to some downside momentum…but prices have held…a break below 1675 might ignite downside momentum. The Euro rally from the Nov lows was astonishing in the face of the European news…but a dismal forecast from the ECB and a triple top on the charts turned the market lower this week…we are going into year-end…FX volumes get thin and weird things happen…as implausible as it seems, if this market rallies and takes out the triple top it could run higher…I’m inclined to think that the more likely course is that the Euro will fall and the USD will rise…but I try to remember to trade what the market is doing…rather than what I think it should be doing! Crude has been turned back by resistance around $89..a break below $85 sets up a challenge of the $80 level (seek weekly chart) and below $80 it’s a long way down to the next support levels…(weak global economies Demand less oil while North American Supplies grow?) Right after the Obama win I wrote that the “Rich” must now feel as though they have a target on their back…since then we’ve seen Obama declare that he has won a “mandate” to increase taxes on the “Rich.” I’ve maintained for the past few years that, “Way More Promises Have Been Made Than Will Ever Be Kept” and I believe that as the bills for the Entitlement Promises grow larger and larger that Socialists everywhere will grab for anything they can get from the “Rich” as they vainly try to deliver on those impossible promises…which will ultimately have to be broken.  As my good friend Dennis Gartman wrote this week, “The President is, if nothing else, a very cool, and some might say a very cold…calculating political animal and he knows all too well the familiar political refrain that he who robs Peter to pay Paul has the everlasting support of Paul….President Obama (is) a champion of class warfare…Paul is delighted at Peter’s impending tax problems…Paul is delighted that someone else shall be forced to pay for (his) entitlement programs…Paul, sadly to say, is more than willing to have Peter fleeced. The President knows this; the President believes this and the President, as a leftist, is ready, quite willing and very able to press ahead.”

Of course, as Margaret Thatcher famously declared, “The problem with socialism is that you eventually run out of other people’s money.” So soak the “Rich” all you want…and then what will you do?

We are living in The Age of Deleveraging (thank you Gary Shilling) and the over-indulgences of the credit boom era will be painfully restructured…which means that some debts will not be fairly repaid…some promises will not be kept….specifically some pension promises. Central bankers and governments around the world hope to “kick-start” economic growth with easy money and stimulative programs (except where selective “austerity” is prescribed) but isn’t it obvious that going deeper into debt to pay off previous debts isn’t working? Isn’t it obvious that write-offs or bankruptcies are inevitable?

The times they are a-changing…big-time…and change brings great trading opportunities…keep your eyes open…and your powder dry.