5 Things You Need to Know from Last Week (Look What Gold Just Did!) 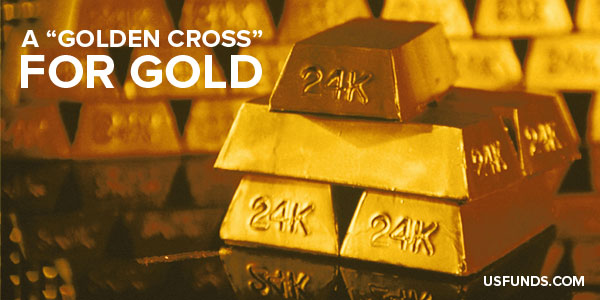 It was a whirlwind week. After attending two big conferences, I landed in Vancouver Friday where I presented at the International Metal Writers Conference. Markets continued to close at record highs, even as political uncertainty remained and the threat of terrorism loomed large over Western nations. Last Monday, gold flashed a bullish signal we haven’t seen in over a year.

There’s much to talk about! Below are five things you need to know from the week now behind us.

A special report by the Wall Street Journal last week confirmed what I’ve been saying for a while: Wall Street is now run by the quantitative analysts, or quants. Numbered are the days when traders and fund managers picked stocks on gut instinct. Today, a decision is made only after whole oceans of data have been processed using sophisticated algorithms.

And yet quants’ role has even further room to expand. As the WSJ reports, quant hedge funds now represent 27 percent of all U.S. stock trades by investors, up from 14 percent in 2013.

To get some idea of the type of analysis quants conduct, take a look at the matrix below. Of course, their methods are far more sophisticated, their data crunched in a matter of nanoseconds, but it’s helpful to see how they might codify many points of data. We aspire to conduct the same sort of analysis, from technical to tactical, to make better, more strategic investment decisions.

Last week at a Chief Executives Organization (CEO) event, I had the privilege of hearing billionaire hedge fund manager Paul Singer speak. His firm, Elliott Management, has one of the most impressive long-term track records, generating a compound annual growth rate (CAGR) of 13.5 percent since its inception in 1977, with only two down years.

Elliott Management currently manages close to $33 billion—not including the $5 billion it raised this month in as little as 24 hours. Yes, billion with a b. Singer, suggesting a potential investment opportunity in distressed stocks could soon open up, recently called on investors to commit a fresh infusion of cash. The resultant $5 billion in dry powder, the most ever raised in the firm’s history, is expected to be deployed at some later date.

Singer continues to be a huge advocate for gold. At the event, he mentioned that he still holds the yellow metal, noting its attractive diversification benefits. This is in line with what I frequently say: You’re unlikely to get rich investing in gold, but as a diversifier it helps to reduce some of the volatility in your portfolio. I like to recommend a 10 percent weighting in gold—5 percent in bars and coins, the other 5 percent in gold stocks—with annual rebalances. The metal is up about 10 percent year-to-date on a weaker U.S. dollar, which has declined more than 5.5 percent over the same period.

3. BBH: Just Say No to Overdiversification

Diversification can sometimes help minimize volatility, but too much of it can lead to mediocre returns. That was the main theme of another speaker at the CEO event, this one from Brown Brothers Harriman (BBH), one of the largest private banks in the U.S. BBH research shows that, if your investment goal is to get rich, a highly-concentrated portfolio is the surest way to achieve it. An S&P 500 Index fund, while possibly delivering positive returns, is unlikely to make anyone a millionaire.

This is good to know, but the problem is that most investors can’t stomach the volatility inherent in a portfolio that holds only a few assets. With minimal diversification, daily swings can be dizzying. Professional money managers and investment banks such as BBH know how to use this volatility to their advantage, but for everyone else, it’s prudent to be diversified in gold, municipal bonds and other assets often seen as havens.

For more on how to deal with market volatility, download my whitepaper, “Managing Expectations.”

Markets watched in amazement last week as bitcoin, the online-only currency, soared to a fresh high of $2,740, more than twice the value of an ounce of gold. On Thursday alone, it traded within a $510 range, underscoring the nearly 10-year-old cryptocurrency’s high levels of volatility and speculation. Some bitcoin analysts forecast even higher gains, while others see the formation of a bubble they liken to the dotcom crash of the late 1990s and early 2000s. Since only March, when it surpassed gold, the digital currency has doubled in value.

These were among some of the discussions at Consensus, a bitcoin technology conference, which I also attended last week in New York. One of the highlights of the conference was hearing from Fidelity CEO Abigail Johnson, who surprised many attendees by embracing the digital currency and supporting its growth. I admire Johnson, head of a traditional financial firm, for recognizing the fact that bitcoin is already disrupting our industry and will likely continue to do so for some time. Not only does Fidelity now allow its workers to buy their lunches using bitcoin, but there are also plans to make it possible for clients to see and manage their bitcoin assets.

Fidelity isn’t the only firm trying to position itself as a bitcoin pioneer. Both Nasdaq and the Chicago Mercantile Exchange (CME) were sponsors of the conference, indicating cryptocurrencies’ gradual shift from fringe curiosity to legitimate speculative asset.

I was shocked to learn that there are now somewhere in the neighborhood of 700 cryptocurrencies, all of them locked in a race to see which ones will come out on top. They’re collectively up more than 400 percent so far this year, the market having risen from $17.6 million in January to $88 million today, according to cryptocurrency and blockchain technology news site CoinDesk.

To “mint” a new cryptocurrency, I learned, speculators raise capital not through conventional means but through crowdfunding, like a 21st century Gold Rush. All regulatory oversight and governance is therefore bypassed. The currency is then issued in an initial coin offering (ICO), after which it can be “mined” using powerful, energy-hogging computers. Naturally, the cheaper the electricity, the better. The hunt for the world’s cheapest kilowatt hour has taken “miners” all over the globe, from parts of Russia to Iceland to Finland to rural China. It looks as if wheat exporters are great again. After being displaced by Russia in August 2016, the U.S. has regained its title as the world’s top exporter of the grain—for now. Interestingly enough, the investigation into possible collusion between Donald Trump’s campaign and Russia has driven the U.S. dollar’s devaluation since the start of the year, which in turn has made U.S. exports cheaper for overseas buyers. Egypt, Algeria, Mexico and Japan all reportedly increased their purchase amounts of American wheat.

Two years ago, it was the Russian ruble’s weakness—prompted by the dramatic decline in oil prices and international sanctions following Russia’s occupation of Ukraine—that gave Russian exporters an edge. Coupled with a bumper crop, the country outpaced both the U.S. and European Union, then the leader.

As I said earlier, the dollar has declined 5.5 percent year-to-date, helping to give American exporters an edge. According to Bloomberg, the U.S. is expected to ship more than 28 million metric tons of wheat this season, an increase of 34 percent compared to the same time last year.

Diversification does not protect an investor from market risks and does not assure a profit.