5 Steps to Make You Secure Online & a Market Update 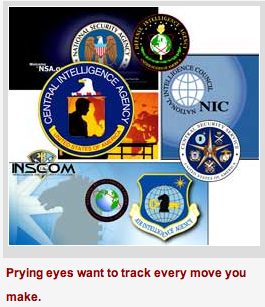 You don’t have to be hiding something to want to tightly guard your online privacy.

Privacy is your right, guaranteed by the Constitution. Besides all three branches of the U.S. government complicit in wanting to monitor everything you do and everywhere you go, large companies want to track your every move as well.

When you surf the Internet, when you send emails, when you’re on your mobile phone, you are exposed to the prying eyes of all kinds of entities, some meaning no harm, but, still, most wanting to track all of your actions and behavior. And then there are the fraudsters and “phishers” who make their living by stealing your identity and your money.

I’ve received dozens of emails from readers asking what I’m doing to protect my online privacy. So in this column, I’m going to review the steps I’ve taken, and then I’ll update you on what I’m seeing in the markets.

Mind you, I receive no compensation whatsoever for mentioning any of the privacy companies below. They are simply at the top of their game based on my research. So I now store all of my digital records offshore, encrypted and in the cloud.

After much research and trying many different offshore storage providers,

Wuala maintains its servers in Switzerland, Germany and France ? none of which are likely to cave in to a subpoena. Everything you store with the firm is encrypted, and only you can access your files. And that means no one else.

Wuala offers 5 gigabytes of free online storage, which is a lot. You can add more storage at competitive rates. The user interface and software is easy to use. There’s nothing fancy you need to do. Just download Wuala’s software, play with it a bit, and you’re ready to store your files offshore, encrypted.

Wuala offers many additional features, including secure sharing of files, a mobile app for cell phones, secure collaboration online, file versioning, and a local “briefcase” sync folder for current documents you need or are working on. If your Internet connection goes down, you can continue working offline and those files will automatically sync up with Wuala once you’re back online.

Wuala uses the strongest encryption around ? an SSL or secure communication channel for transmitting and receiving, and AES-256 encryption for all your storage. AES-256 is military-grade encryption.

And, of course, as with all cloud storage, you can access your files from anywhere in the world.

Second, email. I have not yet moved my email. The reason: Offshore email providers are few and far between. And since I get more than 100 emails a day, on average, and keep my calendar on email as well, I want to make sure I am switching to the very best and most secure offshore email provider I can find.

The top two candidates so far are Neobox (http://www.neomailbox.com), whose servers are in the Netherlands, and Swiss Mail (http://www.swissmail.org) of Switzerland.

I’m leaning toward going with Neobox. But check out both of them.

Third, browsing. Microsoft’s Internet Explorer, Google Chrome, and Apple Safari all collect information on virtually everything you do. Mozilla Firefox is somewhat better, but still not safe enough for me.

Therefore, I have switched to Tor (https://www.torproject.org).

You will sacrifice speed as the Tor browser is nowhere near as fast as the mainstream browsers. But you can surf the Internet, shop online, and do your online banking securely and anonymously. You are not tracked, period.

In fact, Tor is so secure, it is the first choice among journalists working around the globe. It uses a network of virtual tunnels that allows you to access the Internet without compromising your privacy.

There are others out there but, in my opinion, none are as secure as Tor. I highly recommend it.

Fourth, cell phones. This is a tough one. Security on cell phones has not caught up to security in other areas of the wireless and wired world.

They offer several secure services. I’m very interested in this solution and will be trying out its secure mobile services to encrypt my cell-phone calls and video.

Fifth, online security. I am implementing the use of a virtual private network, or VPN. A VPN gives you a secure tunnel through the Internet, free from spying eyes.

There are many VPN services out there. The most versatile I have found is StrongVPN (https://strongvpn.com).

It’s simple to use. Once installed, your VPN operates in the background. It does compromise on speed a bit, but the security tradeoff is well worth it. I highly recommend it.

Now, on to the Markets …

Here’s a brief rundown of what my models are telling me about the recent action in the key markets I follow:

Gold: The strong rally last week was merely short-covering. Expect gold to move a bit higher, but then begin a new leg down. Whether or not gold has bottomed remains to be seen. Either a new low or a retest of the recent low at the $1,178 level is coming. But either way, long-term positions in bullion and mining shares are becoming mouth-watering.

Silver: Much the same as gold above.

U.S. dollar: Sold off after Bernanke’s comments about interest rates. But don’t bet on much of a further decline in the dollar. It’s still in an interim bull market.

Broad stock markets: My models still point to a top, despite the new recent record highs. But remember what I have been saying all along: U.S. equity markets are in a new bull market that will eventually see the Dow top at least 21,000.

The question now is whether or not the June pullback was the correction I was expecting. I’ll need a couple more days to say for sure. So stay tuned to my columns.

You’ll especially want to keep up with anything I publish on the metals and mining shares. Mining shares are now at the top of my radar screen.