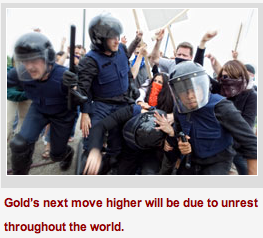 A new year is just two days away. How fast time flies!

For the simple reason that if you follow my work, then you know I don’t buy into all the garbage that’s out there about the markets. By doing so, that also means we’re going to be properly positioned to make a bundle of money in 2014, and beyond.

Let’s take a look at some of the nonsense, especially five market myths that are out there and why ignoring them is your ticket to better profits …

Myth #1: Gold can’t go down when there’s so much money printing going on. This one is my favorites. All the shills out there who constantly talk about fiat money and money printing have egg all over their faces.

They said gold could never go down when central banks are printing so much money. I said “bull.” Listen to that garbage and you will lose your shirt. And that’s what happened to oodles of investors who didn’t listen to me when I said gold had topped back in September 2011. Despite even more accelerated money printing, gold crashed and has now lost a whopping 38 percent of its value.

The facts of the matter are this:

First, what goes up must go down, and vice versa. There is a time for every move in the market, based purely on cyclical and technical factors. So if you get stuck to any one particular theory, vision, or even a set of fundamental forces you believe in, if you don’t realize that there is a time and place for every move the markets make, you will get caught — with your pants down.

Second, money has always been fiat. It was fiat even when the dollar was tied to gold. Why? Because the powers that be, the rule makers behind the monetary system, always have the power to change the rules, and devalue the dollar, as Roosevelt did in 1932.

Money is a medium of exchange, not a store of value. Throughout history, money has always been fiat. It was fiat in Roman times, fiat in Byzantine times, fiat in every great civilization and economy in the world, from Asia to Europe.

You might argue that some currencies are more fiat than others. Sure, I can agree to that. But my point is that all money is fiat. Consider even bitcoin, which is entirely fiat and secured only by its cryptography and the confidence — or lack of confidence — its users have in the digital currency.

Bottom line: Don’t buy into the fiat money nonsense when it comes to gold. Sure, it’s a part of it, but we already saw that part of the fiat argument play its hand in gold’s first leg up, from $255 to its high at $1,920.

That force is now dead, kaput. Gold’s next move higher — which is not that far off — will be due to something entirely different, as I have been saying all along. It will largely be due to the war cycles and how they are now showing massive social and geo-political unrest breaking out all over the word for the next six years.

A. The economy is improving, or …

B. That investors want to take on more risk for potentially greater returns, due to other motivations, like getting away from sovereign bonds, investing in stocks as a safe haven against government bank confiscation, and more.

The bottom line is this, especially at the turning point we are now in with historically and artificially low interest rates: Rising interest rates should be nothing to fear and instead should be music to your ears for the equity markets.

Myth #3: Hyperinflation is the end result of money printing. I used to subscribe to this one. Until I realized that throughout history there has never been a major core economy that experienced hyperinflation. Not one.

Hyperinflation only occurs in peripheral economies that do not have deeply liquid stock, bond and currency markets and/or a bombed out or dilapidated infrastructure.

If you want to bring up Weimar Germany, fine. The Weimar Republic had no bond market, no stock market and in the aftermath of WWI, no infrastructure to it either.

Myth #4. The dollar is dead. Weak, yes. Likely to get weaker — after an interim rally — yes. Likely to eventually lose its status as the world’s single reserve currency, yes.

A new Bretton Woods, if you will, that learns from all the errors of the past and designs and implements a new monetary system without a single currency at its core and certainly not one based on debt.

That time is coming. That is where the world is headed, toward a new electronic reserve currency unit that is used for international trade and transactions only and with all countries maintaining their existing currencies for domestic use only.

The dollar will lose its reserve status, but it will survive as our sovereign currency.

Myth #5: Real estate prices are sure to collapse again as mortgage rates rise. I love this one too, since so many pundits subscribe to it.

But in my opinion and research, it’s a bunch of baloney. Mortgage rates will negatively impact real estate prices when and only when they exceed the real rate of inflation and or the anticipated appreciation in property prices.

Since property prices in the U.S. are still at bargain basement levels, especially on an international basis … since the real rate of inflation at roughly 8 percent is well above current mortgage rates … and since property prices in general have much more upside potential, even to gain back just portions of what they lost …

Not to mention the fact that as mortgage rates do rise, potential home owners will buy now, rather than later, in anticipation of still higher mortgage rates, helping to push property prices higher.

There is simply no way, in my opinion, that another real estate bust lies around the corner.

A pullback from the last year or so of gains? Perhaps. But a crash, no.

There are many more market myths I could go into, but I think you get the picture.

The bottom line is this: Start the coming New Year with your eyes wide open, not shut.

That way you will see through all the market myths that are out there, all the garbage that the shills promote, and you’ll be positioned better than ever to protect and grow your wealth.