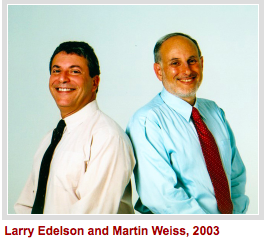 As I presume you know by now, Larry Edelson passed away on March 2, leaving all of us in shock and mourning.

But this past week, I had the privilege of spending quality time with Larry’s cycle forecasting protégé, Mike Burnick.

Mike has worked closely with Larry since he joined our firm nearly two decades ago. He is steeped in cycle analysis. And he has used it to make an important contribution to the team’s amazingly accurate forecasts, especially regarding gold and stocks.

October – November, 1999: “19-year bear market in gold is OVER. Finished, Kaput. We’re entering a bull market the likes of which you haven’t seen since the great glory days for gold in the 1970s. But don’t expect gold to shoot straight up. There are bound to be pullbacks, especially during the early stages.” Shortly thereafter, they warn gold will slide to the $250 level before beginning its long-term rise.

Result: Investors acting on this signal have the opportunity to buy gold-mining shares close to their lowest prices in decades.

May 2016. “More and more investors will get trapped in the precious metals’ first leg up … And those investors will be badly crushed under tens of billions of losses when gold, silver, platinum, palladium — and especially mining shares — collapse back down to near their record lows of late last year.”

Result: At first, as gold continues to move higher, their subscribers are frustrated with this forecast. But beginning in early July, the price of gold sinks by $200 per ounce, providing a much better buying opportunity, and subscribers cheer.

At the time, the Dow is trading near 13,000. In Europe, a major sovereign debt crisis rages. In the U.S., pundits are deeply concerned about “the weakest economic recovery in history.” Even friends and family say Dow 20,000 is “unbelievable.” But four years and eight months later, on December 20 of last year, the Dow hits an intraday high of 19,988, just 12 points below their target of 20,000. And on January 25, 2017, just a few weeks beyond the target year, the Dow bursts through the 20,000 barrier.

Nor do just a handful of people see it. The original forecast of Dow 20,000 by 2016 is sent to 392,140 subscribers to Money and Markets, 37,291 subscribers to Real Wealth Report, and at least two million investors who receive the same forecast via advertisements in the mail and on the Web.

They are equally accurate in timing and predicting stock market crashes going all the way back to Larry’s forecast of the Crash of 1987!

How do you do it?

So as you may suspect, when I met with Mike last week, my obvious and urgent question was “precisely how did you do it?” “I assume you’re referring to ‘you’ in the plural,” he responded, “because I cannot take more than my share of the credit. Larry was the one who taught me cycles analysis and who was our mentor throughout these years. But before I answer your question, may I ask you one of my own? March 2017 is a major anniversary that no one seems to be talking about. Care to guess why that date was so important?”

I recalled: “The eight-year anniversary of this bull market, which began in March of 2009.”

“Well yes, that too,” Mike said with a chuckle. “But what I’m referring to is something that happened on March 11, 2011. This week is the six-year anniversary of the great tsunami that struck Northeast Japan. It came on the heels of a massive 9.1 undersea earthquake, the most powerful earthquake ever recorded in Japan. It triggered a tremendous wave of up to 133 feet. That’s 12 stories high! Imagine how it felt to confront a mass of water as tall as a 12-floor building coming straight at you! Imagine the destruction in its wake!”

I was silent for a moment, recalling the horror I felt that morning when I first saw the headline in the Los Angeles Times, and immediately thought about our son, Anthony, who lives in Tokyo. Thankfully, I soon discovered that Anthony was not among the victims because, coincidentally, that same L.A. Times story included a statement from the first American witness quoted from Japan, Anthony Weiss.

“How does that relate to our topic today?” I asked as I exited my daydream.

“It’s a perfect metaphor for our forecasting methodology,” Mike responded. “We track the great cyclical waves of history, and right now, the biggest, most enduring, consequence of those cycles is the Global Money Tsunami — the massive waves of flight capital from overseas that are driving our market higher. You know that. We write about it all the time. But now let me tell you about the powerful cyclical forces behind that tsunami.”

“That’s exactly what I want to talk about.”

While pulling out a series of charts stretching back for decades (and in one case, for centuries!), Mike promptly proceeded to rattle off four major cycles with a high level of precision and certainty:

The Kondratieff wave (K-wave), ranging from 40 to 60 years. Close students of this cycle could have foreseen, well ahead of time

Juglar and Kuznets cycles, approximately 9- and 18-year cycles, respectively. Again, those following these cycles could have foreseen …

Cycle of Innovation, the 50-year cycle of business innovation discovered by Joseph Schumpeter. Predicts periods of “creative disruption” and entrepreneurship, along with political upheavals that can often accompany rapid technological change. Cycle is now still very high and holding, but targeting a bottom after 2020.

War Cycle, ramping up through 2020. Not just armed battles, but also trade wars, currency wars, and cyberwars. Not merely between nations, but also domestic civil unrest, revolutions and escalating repression or asset confiscation by governments against their citizens.

“Anyone who truly knows cycles,” Mike concluded, “should be well versed in precisely when these are likely to peak and bottom. However, what many cycle analysts don’t know so well is two things: How to track them closely to determine when they may be hitting somewhat earlier or later than originally projected. And most important of all, how, during very rare historical periods like today’s, these cycles can CONVERGE into one time and place.”

“Convergence! That’s where Larry and team really hit a home run, isn’t it?” I asked.

“Yes, it certainly is. And in this decade, we have the most powerful convergence of the cycles since the 1930s. I say that not to focus on the Great Depression, but rather to focus on the massive up-wave that ensued after the Great Depression and World War II. It started in gold. Then came the postwar boom in stocks. And finally, the greatest bull market and economic expansion in all human history. Not without big recessions and disasters in-between, of course. But in hindsight, all of those — especially the stock market crashes of 1987, 2000-2003 and 2008 — were historic buying opportunities. What’s most important of all is that, with the foresight that careful cycle analysis can give you, all of those cycle bottoms were predictable and predicted.”

Mike and I were silent as we reflected on the enormity of these historical forces and the important contribution Larry Edelson made to the world by helping to bring them to light. “Now that Larry is gone,” I queried, “what is your vision going forward? What are your forecasts for the next few years?”

“The same vision as before. The same forecasts we have already published repeatedly, from the same exact body of knowledge: The long-term cycles I’ve just told you about, seen through Larry’s telescopic lens that I’ve inherited, for which I will be forever grateful.”

“Don’t understate your own analytical powers,” I cautioned.

“Thank you for that. But you asked for our forecasts. The first forecast is that gold will surge to $5,000 per ounce, or higher. In the current phase of that bull move, it’s driven primarily by the same global money tsunami we discussed at the outset. That comes with both ebbs and flows. So beware of corrections, such as the one that just started last month. But this will be a wonderful long-term buying opportunity. That’s because, as inflation picks up steam, the latter stages of the move in gold could be parabolic, much as you saw in the late 1970s, when the price of gold doubled in just one year.

“Forecast number two: The Dow will explode to 45,000. I know that may sound unbelievable. But in 1999, we saw the Nasdaq double in just one year. And the time frame we’re talking about is much longer than that. If we didn’t know better, we’d throw our hats in the ring with all those pundits who still say the economy is not strong enough and interest rates are rising, so the Dow must crash. But, if you understand the four cycles we talked about … if you understand the Global Money Tsunami that will flow to the U.S. from a sinking Europe and later, a sinking Japan … you will also understand how to make a fortune over the next few years with select stocks that deliver life-changing profits.

“Forecast number three: Sovereign bond market will collapse. And that collapse will emerge as another driver of funds that rush into stocks. Why? Because solid private-sector assets, such as the shares of U.S.-based blue-chip companies, will actually be seen as safer than bonds. Because the governments of Europe, Japan and, ultimately, the U.S. are essentially bankrupt. There’s simply no way they’ll ever make good on their outstanding debts — not to mention their promises for retirement pensions (such as Social Security), healthcare, and more.

“Forecast number four is the collapse of the European Union and the euro. Many think the European Union will survive. Many hope that, because Germany’s economy is hanging in there, the European sovereign debt crisis is done and over. That view is dead wrong. That’s why we have long predicted that the biggest surprise of all will be not only the decline, but also the demise of the EU and the euro. Now, as you can plainly see, that day is much closer.

“Hitch your wagon to these cycles, and you will win. Ignore them, fight them, or simply drop out, and you will lose. I’m all in. I trust you are too.”

I thanked Mike for sharing these insights. He promised to provide many more in the weeks to come.