3 Reasons to Bet Big on One Unloved Market Sector 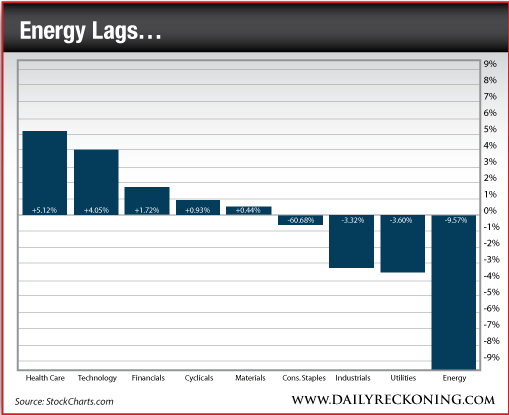 One of the worst performing groups of stocks on the market is setting up for a huge bounce.

Since late June, energy stocks have slowly retreated. This previously red-hot sector overheated after a furious rally — and has fallen way behind the rest of the market. That’s the number one reason I’ve been avoiding this sector for the past several months.

Don’t believe me? Take a look at the performance of major sectors over the past three months… As a group, energy stocks are down nearly 10%. Most investors have left this sector for dead.

I see signs that are pointing toward a significant bounce. If you have the guts to buy these stocks now, you could even have a shot at riding these energy names to new highs by the end of the year… 1. Buyers are appearing toward the bottom of XLE’s trading range

Energy names have been drifting lower for three months in an orderly fashion. Yesterday, many of these stocks surged off their lows on heavy volume. That gives you a low-risk entry point right near potential support.

2. XLE looks primed for a big bounce off its long-term moving average

$92 is an important price for XLE. It’s just above its 200-day moving average (not pictured in our chart). It’s also right next to horizontal support that formed back in May when energy names were consolidating for their big run higher in early June.

Here’s where your reset trade comes in. That big move back in June that sent energy stocks parabolic? It’s been totally wiped out. 100% of those gains from June are gone and XLE has backed out of nosebleed territory. The shareholder base has turned over. All the momentum players who were trying to book quick gains in June have disappeared and investors who were late to the party have been stopped out.

June’s surge was unsustainable. By the end of the month, most energy stocks were extremely overbought by almost every metric you can imagine. These stocks needed a hard reset — and that’s exactly what they received over the next three months…

Now, you have the perfect low-risk opportunity to buy energy stocks for a potential bounce. Those damn millennials are up to no good again!

Their music is strange. They won’t look up from their phones. And they’re going to ruin the stock market.

At least, that’s the story we’re hearing these day. But here’s the problem…

The aging baby boomers are still very much in control of the investment world.

“The Baby Boomers are still the ones really driving the bus in the stock market,” Bloomberg reports. “Consider the leadership of the stock market this year: health-care shares are up more than 16 percent for the biggest advance among 10 groups in the Standard & Poor’s 500 Index. Companies that rely on discretionary consumer spending are barely up 1 percent, the worst performance.”

It’s also important to note that the bulk of millennials haven’t hit their “investing primes” just yet. In fact, most of them are just now beginning to form households. It will take several years for them to hit their earnings stride and really start to sock away some money in the markets.

For now, the oldies of the baby boom generation are still at the wheel. It’ll be some time before the big shift occurs…

Greg Guenthner
for The Daily Reckoning