2.607 Days Later, The “Most Hated Bull Market Ever” Is Now The Second Longest In History 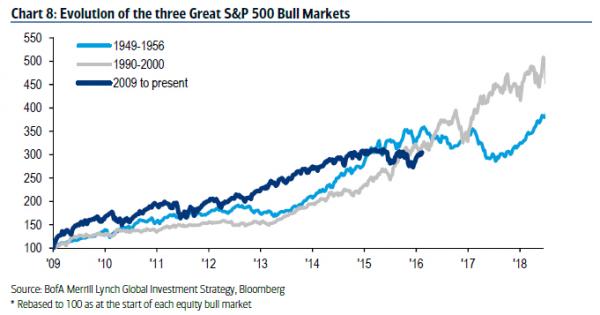 It’s official: as of today the bull market that has been mocked as fake, doomed and history’s most-hated just earned a new title: the second-longest ever. And it only took $14 trillion in central bank liquidity, a global, coordinated central bank “put”, central banks purchases of Treasuries, MBS, ETFs and corporate bonds,  and nearly 700 rate cuts in the past 7 years to achieve it.

The stock market advance that started seven weeks after Barack Obama’s first inauguration, and specifically with Obama’s historic March 3, 2009 remark in which he said that “what you’re now seeing is, profit and earning ratios are starting to get to the point where buying stocks is a potentially good deal if you’ve got a long term perspective on it,” has now lasted 2,607 days.

Since then it has dodged and waved through three 10% drops in the last 19 months while avoiding the 20% decline that denotes a bear market. That matches a rally from 1949 to 1956 which straddled the presidencies of Harry Truman and Dwight D. Eisenhower. Only the dot-com bubble of the 1990s lasted longer at 3,452 days.