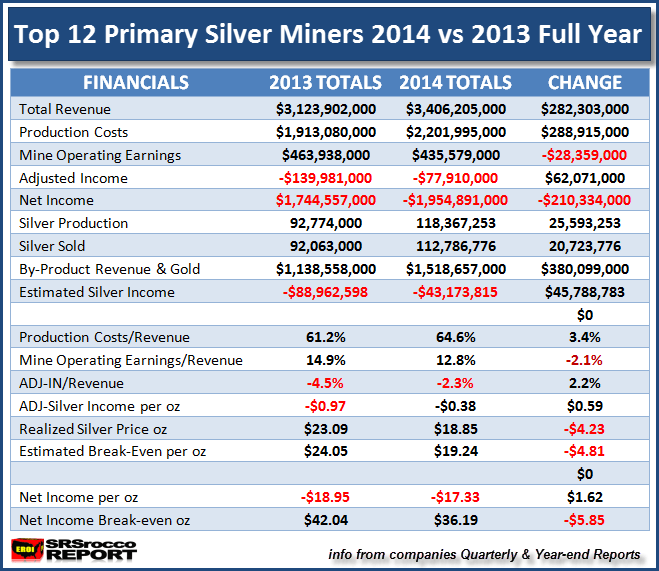 With the last remaining company finally releasing their year-end results, my top primary silver miners lost a combined $1.9 billion in net income in 2014.  Two-thirds of the group reported significant write-downs (impairments), while the two of the largest companies suffered the highest losses.

While these financial items are apart of their profit and loss statement, I like to focus on their adjusted income which removes these items in order to get a better idea of how successful they are at MINING SILVER.  As I mentioned before, two of the largest silver producers in the group suffered huge net income losses due to large impairments, but their adjusted income wasn’t as bad.

For example, Coeur stated the largest net income loss of the group at $1.15 billion while Pan American Silver came in second at $545 million in the red.  However, the adjusted income for Coeur was -$112 million compared to Pan American Silver at -$20.8 million.  Coeur’s large adjusted loss for the year, awarded them with the third highest estimated break-even of the group at $22.38.  Which means, Coeur lost an estimated $3.51 for each ounce of silver they sold at an average price of $18.87 in 2014.

Here is the combined financial data for the top 12 primary silver miners in my group: The major reason the group’s total silver production and sales increased so much in 2014 was due to Tahoe Resources Escobal mine reaching full year commercial status.  Tahoe’s Escobal mine produced over 20 Moz of silver in 2014, but only sold 18.1 Moz.  Tahoe is the lowest cost producer of the group even though Hecla likes to brag it has one of the lowest cash costs.  CASH COST accounting is not a GAAP (Generally Accepted Accounting Principle) and I believe is totally useless in determining the overall profitability of a mining company.

You will also notice the group’s total production costs increased $288 million, year over year.  This was due to the addition of Tahoe Resources $127 million in production costs along with the group adding a few newly acquired primary gold mines as well as cost increases from higher silver production from the other members.

I would like to point out just how much by-product (and gold) revenue the group reported in 2014:

CASH COST ACCOUNTING:  Needs To Be Thrown Out The Window

I brought this subject up to prove to the precious metal investor that by-product sales are not CREDITS as the industry lists them on their balance sheet when they calculate their cash costs.  To arrive at a CASH COST figure, the company deducts their by-product credits from the cost.   What a silly and stupid waste of time.

Can you imagine the losses the individual companies and the group would have suffered if they did not include their by-product sales in their balance sheets?  We must remember a CREDIT is a FREEBIE.  When you go to the store and you have a CREDIT on your account, that’s a freebie.  On the other hand, the mining companies need every bit of their by-product revenue to fortify their balance sheets.

Sure, some of the revenue comes from a few primary gold mines, but the majority is a by-product of mining silver.  This isn’t a CREDIT, it’s a DAMN necessity… LOL.

If we were to deduct $1.3 billion of the supposed by-product credits from the total revenue, how would that impact their bottom line??  Instead of the group suffering a total adjusted loss of $77 million, it would be a whopping $1.37 billion (add $77 million to $1.3 billion).  Now, I used $1.3 billion of by-product revenue instead of the full $1.5 billion shown above because I deducted a conservative $200 million of primary gold sales from their primary gold mines.

Again, for a company to actually list a CREDIT, it wouldn’t need that income or revenue to be profitable.  Which means, if by-product metal sales were actually CREDITS, then the company would be profitable without them.  As we can see, this is not the case.

I am quite surprised that Jeff Christian’s CPM Group still uses the worthless CASH COST metric in their annual Silver Yearbooks.  CPM Group sort of bragged in their 2014 Silver Yearbook that the primary silver miners cash cost fell to $9.68 in 2013 compared to $10.01 in 2012.

Unfortunately, there still seems to be a good percentage of precious metals investors (new and old) who believe it costs $10 to produce silver.  There isn’t one company in my group that has an estimated breakeven anywhere near $10.  The lowest is Tahoe at $13.70 with most in the $17-22 range.

According to my formula, the group suffered a net loss of $0.39 for every ounce of silver they sold in 2014.  How high would the group’s losses be if we didn’t include their by-product metal sales?  Let’s be really conservative and subtract $1 billion of by-product metal sales and see how that would impact the loss per ounce:

Without adding the supposed BY-PRODUCT CREDITS of a conservative $1 billion, the group would have lost another $8.87 on each ounce of silver sold.  Thus, the breakeven for the group would have jumped to ($19.24 + $8.87) $28.11.  If the primary silver mining industry received $18+ an ounce for the silver they produced in 2014, without their by-product revenue, they would be in REAL TROUBLE.

This is exactly how CPM Group gets away with publishing a primary silver mining industry $10 cash cost.  By the industry deducting all of its by-product metal sales (credits), it can show a very low CASH COST which has nothing to do with profitability.  So why does the industry continue to publish this worthless metric?  That’s a good question.

How Much Lower Can The Group’s Breakeven Go?

I would imagine we will continue to see a drop in the group’s breakeven over the next several quarters.  Because the price of oil is now half of what it was in 2014, this should finally make its way through the cost structure in the primary silver mining industry.  However, I don’t see that much of an overall decline in the group’s breakeven for producing silver.

If the estimated breakeven for the group was $19.24 in 2014, I don’t see it falling too much below $18 this year.  I believe the primary silver mining companies have done as much as they can to cut costs and there really isn’t a lot of wiggle room left.

Furthermore, even if the group’s break even was to fall to say $17.50, the average price of silver is now trading at $15.90.  Thus, the primary silver miners as a group would still be losing money.  This is quite a shame because these mining companies are the few entities in the world actually producing WEALTH or a STORE OF WEALTH, while the Commercial and Central Banks continue to rob, steal and loot wealth from the public.

I will be publishing PAID REPORTS on various aspects of the silver industry and market.  One will focus on the top 12 primary silver miners in my group analyzing which companies are the best candidates to consider owning when we finally get the MAD RUSH IN GOLD & SILVER.

Please check back for new articles and updates at the SRSrocco Report.  You can also follow us at Twitter