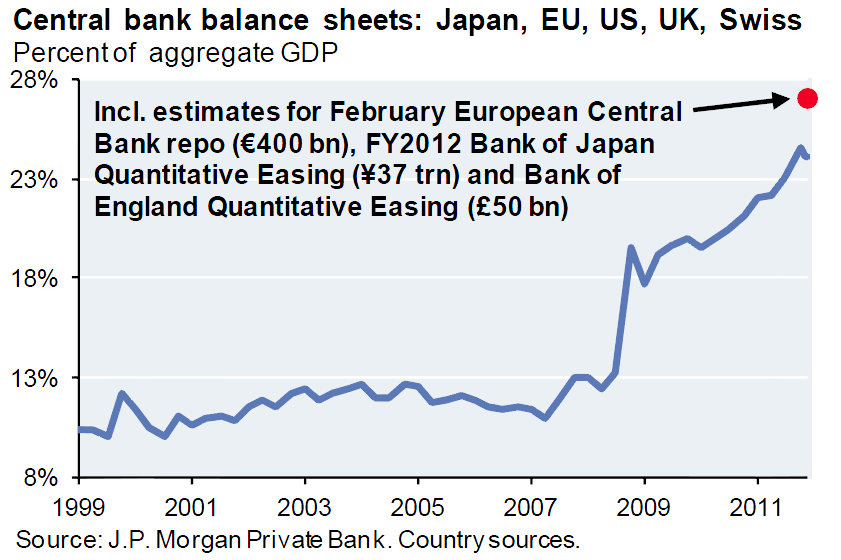 We have been saying it for weeks, and today even the WSJ jumped on the bandwagon: the sole reason why crude prices are surging is because global liquidity has risen by $2 trillion in a few short months, on the most epic shadow liquidity tsunami launched in history in lieu of QE3 (discussed extensively here in our words, but here are JPM‘s). Luckily, the market is finally waking up to this, and just as world central banks were preparing to offset deflation, they will instead have to deal with spiking inflation, because the market may have a short memory, it can remember what happened just about this time in 2011. And the problem is that when it comes to the inflation trade, the market, unlike in most other instances, can be fast – blazing fast, at anticipating what the central planning collective’s next step will be, after all there is only one. And if Bank of America is correct, that next step could well lead to the same unprecedented economic catastrophe that we saw back in 2008, only worse: $200 oil. Note –this is completely independent of what happens in Iran, and is 100% dependent on what happens in the 3rd subbasement of the Marriner Eccles building. Throw in an Iran war and all bets are off. Needless to say, an epic deflationary shock will need to follow immediately, just as in 2008, which means that, in keeping with the tradition of being 6-9 months ahead of the market, our question today is – which bank will be 2012’s sacrificial Lehman to set off the latest and greatest deflationary collapse and send crude plunging to $30 just after it hits $200.

How do we get to $200 crude? Read the detailed explanation and view the charts HERE