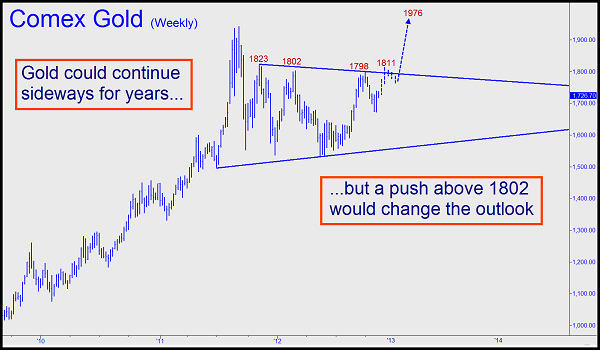 For gold investors, first the bad news – and let us be clear up front: it’s not really that bad. Notice in the Comex chart below that the price of gold has been meandering within a pennant formation for more than a year. You don’t have to be a technician to see that this could comfortably continue for some time – well into 2014, perhaps – before the converging lines of the pennant will narrow sufficiently to force gold to “escape” either up or down. You can relax about which direction is the more likely, since the pattern so far looks like a classic consolidation, tipping the odds toward a breakout rather than a breakdown. However, our own proprietary tools (a.k.a. Hidden Pivot Analysis) suggest that it could be a while before the excitement begins. This is implied by December Gold’s failure in October to surpass an important peak at $1802 recorded seven months earlier, in March of 2012. Had the recent rally exceeded that peak, it would have created a bullish “impulse leg” of weekly-chart degree, clearing a path to at least $1976. Alas, the rally chickened out just five points shy of impulsiveness, casting gold into corrective purgatory for an indefinite spell.

So what would it take to hasten bullion’s northbound exit from the pennant? Here the news is good, for it would require nothing more than a measly $5 thrust that is uncorrected between 1798 and 1803. Moreover, according to our technical runes, the thrust would not have to exceed the third peak at $1823 to signal a breakout with sufficient power to reach $1976 over the near term. In fact, those familiar with our “camouflage” trading technique could conceivably be handed a rare opportunity to board with risk very tightly controlled if a shallow pullback occurs from somewhere between 1803 and 1823. This is shown in the chart with dotted price bars, and the opportunity would be about as good as it gets for bulls looking to initiate positions or add to existing ones. If you’d like to learn more about “camouflage” trading and the Hidden Pivot Method, click here.