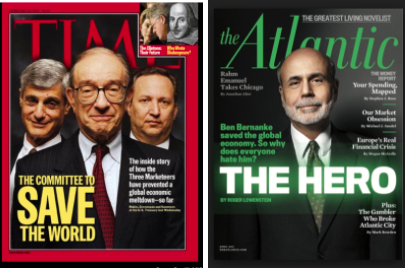 Central bankers are managing paper currencies for the benefit of the people, not the financial and political elite. Consequently consumer prices are stable and there is no reason to own gold as protection from currency devaluations.

Time Magazine confirmed that Greenspan, Rubin and Summers saved the world in 1998. Bernanke did it again after the last crisis. In 2012 he was called “The Hero” by The Atlantic. Our economic world is now stable and secure and central bankers will not need to “save” it again. Because we live in a safe world, there is no need for gold.

China, India and Russia have acquired a massive stockpile of gold bullion, (not the paper stuff) while the western world has sold gold to them. Frankly, who cares why the Chinese are buying gold or what they anticipate?

Gold will trade under $700 because it is a useless commodity.

The U.S. official debt is $20 trillion and unfunded but promised liabilities are $100 – $200 trillion, but not to worry… (Devaluation and default are viable options but officials don’t discuss either in polite company.)

Central banks have created, from “thin air,” about $10 trillion since the financial crisis, but that was “necessary.” Believe what central bankers announce and trust their good intentions…

Per James Rickards, “The Chinese credit bubble is a ticking time bomb. That bubble is primed to explode with or without anything Trump does.” As long as China exports telephones and TVs to us, who cares about their credit bubble? Why would their bubble impact the western world? Not to worry…

Politicians and central bankers have told us our paper currencies are strong and well managed so we should ignore gold. Would they lie to us?

Per Adam Taggart: “… we now live under a captive system. From our retirement accounts, to our homes, to the laws we live under – the banks control it all. And they run the system for their benefit, not ours.” But the “official story” is that banks are helpful, good for the economy, “doing God’s work” and are anxious to increase our indebtedness. Probably it’s true… Best to ignore Taggart and trust the banking cartel…

From Future Money Trends (Dan Ameduri): “What a total Ponzi scheme it is with central banks buying each other’s bonds, buying their own government bonds, and buying stocks…It’s pure lunacy – what a total scam.” Create currency from “thin air” and buy stocks with it. Sounds fantastic! The Swiss National Bank owns over $60 billion in stocks, but that is a good thing, right? No downside, I’m pretty sure…

Given the successes of the War on Poverty, War on Drugs, War on Terror, Vietnam War, Afghanistan War, and other wars, we should expect great things from the Syrian War, expanded Middle East Wars, Korean War 2.0, and any other wars created as distractions and justifications for massive spending.

Fortunately we know the financial and political elite have implemented effective fiscal and monetary policies to maintain high employment, no inflation, and strong moral values. Our economies are intelligently managed for the benefit of everyone. With no hints of oncoming catastrophes, currency crashes, corrections in over-valued stocks, or other disturbances … we should feel financially safe and secure.

Student loan and sub-prime auto loans total less than $3 trillion, so not to worry… Real estate, currency, and bond bubbles are no big deal, and the U.S. pension crisis is well under $10 trillion, so nothing to see here…

A crisis/crash can occur at any time but might be delayed indefinitely:

Read my short book explaining through 44 graphs why we need gold and silver as financial insurance. “Buy Gold Save Gold! The $10K Logic.”