130 billion bad reasons to be careful 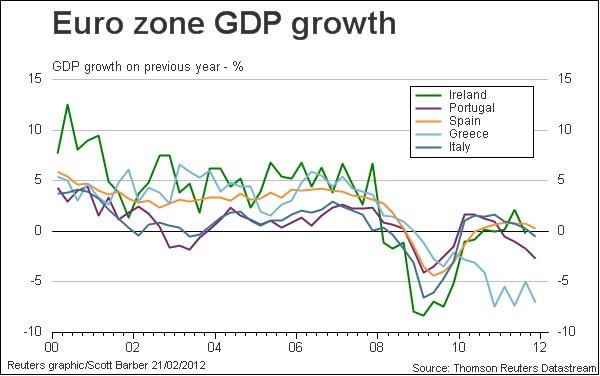 “So what?” he asked. “Things will only get worse. We have reached a point where we’re trying to figure out how to survive just the next day, let alone the next 10 days, the next month, the next year.”

One adage that seems to work as much as anything else, and why it is an adage I guess, is “buy the rumor and sell the news.”  I won’t bore you with the behavioral aspects of why this works, I think you know.  We are seeing it a bit this morning on display on news a Greek default has been averted: the euro is lower, and ditto for most Eurozone bonds since the announcement of a deal that gives Greece another 130-billion-euro it can pour down the rabbit hole with the rest of the money funneled in by Eurozone taxpayers.

Of course, sooner or later financial engineering reaches the limits of its public relations effect and there must be some underlying payoff from said engineering besides getting funds to follow banks chasing into periphery debt for a trade.  It’s not that rising periphery bond prices, i.e. lower yields, isn’t helpful; it is.  But even at current rate levels, it will be mighty hard for many countries to maintain austerity pledges; all attempts to do so will likely accentuate the trend we see in the chart below: And of course, this chart is the mirror image of the domestic adjustments periphery countries have to make because they do not have a free-floating currency available to help them make these adjustments: Thus, periphery economies desperately need some growth.  Rising unemployment and tighter budgets will not produce revenues needed to pay debt; instead it produces a self-feeing vicious spiral downward.  This view seems completely at odds with the Troika program even though the Greek economy provides them with live test case of abject failure stemming directly from the implementation of their own flawed theories.

And here is why it will likely get worse for Greece and other periphery countries whose growth is heading lower—the real economy will be starved.

We have already witnessed this economic/money/manipulation phenomenon in the US, from the WSJ this morning:

“The eight giant European banks that have disclosed their annual results in recent weeks reported holding a total of about $816 billion in cash and deposits at central banks as of Dec. 31.  That is up 50% from a year earlier, when the same banks were holding roughly $543 billion.”

Does any of this sound familiar?  You can lead a horse to water, in fact you can force-feed said horse with massive amounts of reserves, but you can’t make him lend any of it to the real economy where real people build real businesses and hire other real people who need real jobs.

Just in case you forgot just how tightly US banks have held on to their Fed sponsored reserves via the massively steep yield curve that impoverishes savers to subsidize bank healing, here is a look.  This chart shows reserves in the US banking system … hmmm … three years and counting so far since Bernanke and Company decided this is the only viable strategy for the economy.  Viable for financial assets, but the other side of the economy is still starved … The point is, despite the new Greek rescue (I am losing count how many we have had so far), it appears the Eurozone, now clearly a two-track world with Germany bathing in credit and low rates and low unemployment (which adds to more angst and animosity toward Germans amongst the PIIGS), appears collectively heading into deeper recession.

One wonders if now, finally, EU leaders have run out of rabbits of financial engineering to pull from their hats.  Financial engineering is a lot easier than real growth.  If you don’t believe me, go ask Goldman; after all it is their fun and games that caused much of this Greek problem in the first place.