Posted by The Contrarian Outlook 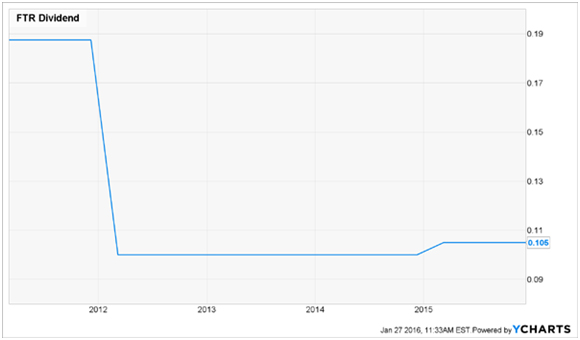 First, it was Kinder Morgan (KMI). Then, ConocoPhillips (COP). Which sacred dividend is going to get cut next?

Regular readers know that I believe big oil is a big avoid for now. But if you insist on speculating in the goo patch, stick with Exxon (XOM).

There are payout problems outside of energy, too. A quick look at Reality Shares’ DIVCON screen reveals seven 4% payers in “DIVCON 1” territory. This means they’re more likely to cut their dividend than raise it. Let’s discuss these, and a few more high yielding problem children.

Frontier Communications Corp. (FTR) is a good example of a sky-high yield (8.8%) that should set off alarm bells. As for a low P/E, the “E” part of the equation is non-existent—the telco has posted losses in three of the last four quarters, and the Street forecasts a loss of $0.17 a share in 2016.

Add rising long-term debt (up 74% from a year ago as of the end of Q3) and a payout ratio that’s also headed in the wrong direction (81% of free cash flow, up from 67%) and you get a sense the dividend—which has barely budged since it was cut in 2011—is on borrowed time again.

FTR Hangs Up on Income-Seekers