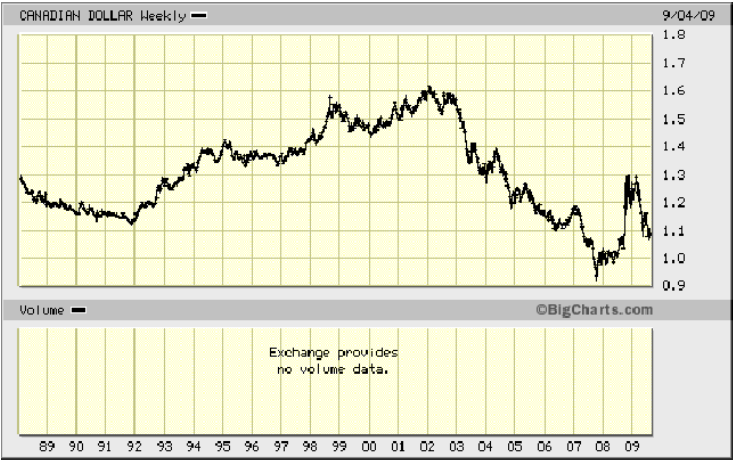 Ed Note: One of Michael Campbell’s favorites, Donald Coxe has 35 years of institutional investing and money management experience in the United States and Canada, and a unique background in North American and global capital markets. He also thinks Canada has the best banks, and the best range of commodity-oriented stocks. And it has the best North American currency. Chart and Comment by Dennis Gartman of The Gartman Letter L.C.

“C$ VS. THE US$ FOR THE PAST TWENTY YEARS:  The sea change came back in ’02‐’03 and the trend  ever since has been in favour of the C$, with the world gaining respect for  the fact that Canada has all of the things that the other countries of the  world need to sustain economic growth including food, energy and  water… AND that Canada tends never to abrogate contacts and does support free trade.”

The stock market’s September Song is traditionally the blues. If this year’s music of the markets follows the customary dance card, it will be a sharp mood swing from the splendid revels and boleros of spring and summer.

Why should the blues be back? With the S&P up by a half since March, then the recession must be yesterday’s story, and the next bull market has begun. That’s what most of the major indicators—ISM, Leading Economic Indicators and their like—tell us.

Except that it’s not just stocks that are rising: so are foreclosures, unemployment, bankruptcies, bank failures, and government deficits at all levels. The story of our time has become a Tale of Two Ditties: Roll Out the Barrel, and Brother, Can You Spare a Dime?

This month, we update major cautionary themes we have been discussing in recent issues, in the light of months of ebullient stock markets, an increasingly bullish economic consensus, and a potentially historic shift in voters’ views of the financial and economic implications of President Obama’s policies.

Each week, we read analyses from strategists and economists comparing this recession to its predecessors all the way back to the Depression, on the implicit assumption that we remain in an historic continuum. Yes, each downturn has some different characteristics than others, but the unstated axiom in the reasoning is that the US and other OECD economies today can be understood best by understanding how they have behaved at past turning points.

In our view, this recession is unlike any other since the onset of the Industrial
Revolution in two crucial respects:

•      it is the first to hit  North America and Europe in  which deteriorating demography is a key ingredient—and none of the policymakers and almost none of the elite economic forecasters even mention it;

•  it is the first in which the continued strength of the economies of China, and, to a lesser extent, India and East Asia, is widely recognized as the condition precedent to a global recovery, yet the consensus remains unwilling to draw the obvious conclusions from this historic transformation.

We believe that these unprecedented factors make forecasting the shape and strength of the US and European recoveries unusually difficult. Policymakers within the OECD nations are resorting to programs and remedies with roots in Keynesian and Friedmanesque formulas that either should have been used to prevent or end the Great Depression, or that have been employed in subsequent recessions with apparently successful results.

But what if the world is changing so decisively that massive deficits and Depression-era interest rates will not produce—on a sustainable basis—the anticipated good results for the US and other major OECD economies whose demographic decay is even more serious than America’s?

This month’s title is a riff on America’s unique music form. We use it to discuss (1) the implications of the continuing US demographic decay and (2) a possibly momentous shift in American confidence in the Democrats’ ambitious programs to reshape the economy after it escapes the recession.

President Obama’s approval ratings have fallen precipitously since our last issue, as have the ratings for the Democratic Congress. If, with the post- election glow gone, the recovery were to falter, it would be very difficult for the President and his party to rally public support for new stimulus or bailout legislation, and investors worldwide might begin to factor a failed Presidency into their appraisal of US financial assets. The image of a handsome, smart, creative, popular President who would blow away the Bush Blues was wondrous for Americans’ view of themselves and the world’s view of America. If that image were to crack in Dorian Gray fashion, it could be a real negative for US equities and America’s ability to finance its coming decade of deficits.

We believe most equity groups in the US are due for a correction that could be quite prolonged, but we remain bullish on Emerging Markets as an asset class, and on commodities and commodity stocks. Given that outlook, we think balanced portfolios should reduce endogenous risk. We are adjusting our Asset Mix to increase bond exposure—both in percentage and duration terms—and are reducing recommended levels of US and European Equities, and Cash.

1. Upgrade equity portfolios to reduce endogenous risk. Trade upward in quality, and, in balanced accounts, increase bond exposure. There is, at present, too much froth for comfort. After the grandest recession /recovery stock market rally on record, this is hardly a good time to commit new money into equities.

3. Continue to overweight commodity-oriented companies in diversified equity portfolios. They have been underperforming the US market since US stocks began to reach the top of the troposphere, and their most volatile and gaseous members soared into the stratosphere. If the economic bulls are right, commodity prices will soar. If it takes more time—and some signs of restraint in Washington—to launch a sustained US recovery, then commodity stocks will have the attraction that comes from producing goods priced by the new Asian economic leaders.

4. The regional banks index (KRE) has not participated in the broad rally recently, and is sharply underperforming the S&P, mostly because of widespread construction loan losses. The BKX has more than doubled since March, but it is dominated by the banks that got the most help from Washington, so we have trouble seeing that steroid-based performance as the signal to buy stocks. Until the KRE starts to show good relative strength, the rally remains suspect, and investors should be lightening up on financial stocks.

5. Until this week, gold had been range-bound this year, so gold shares sharply underperformed the market. On Tuesday, bullion staged a sudden upside breakout from its pennant pattern, which could signal a sustained move through $1,000. As we were going to press, it had moved through $990. Gold shares are attractive havens, because gold is the only asset that can be expected to outperform under both extreme scenarios— financial collapse and runaway inflation. Remain overweight gold within commodity-oriented portfolios.

6. Whether by coincidence or otherwise, crude oil has been trading rather closely to the S&P. Oil consumption statistics do not support a valuation of $70 for crude oil. We recommend caution on oil stocks here.

With 35 years of institutional investing and money management experience in the United States and Canada, Donald Coxe has a unique background in North American and global capital markets.

As Chairman, Coxe Advisors LLC, a newly incorporated investment advisory firm in Chicago, Don will continue to follow global capital markets, and to write and speak for investors.

In 2008, Mr. Coxe was the recipient of the National Post / StarMine lifetime achievement award for excellence in investment research. He has consistently been named as a top portfolio strategist by Brendan Wood International, and was ranked number one in the 2007 and 2008 surveys.

He was CEO of a major Canadian investment counseling firm, Research Director and Strategist for Canada’s leading institutional dealer, a strategist on Wall Street, and CEO and Chief Investment Officer for Harris Investment Management Inc., an investment management firm specializing in pension and mutual funds. At Harris, he was co-manager of the flagship Harris Insight Equity Fund. In 2005, Harris Investment Management was ranked No.1 overall as the best-performing mutual fund organization in the US.

A respected business writer, he is the author of The New Reality of Wall Street, published in 2003.