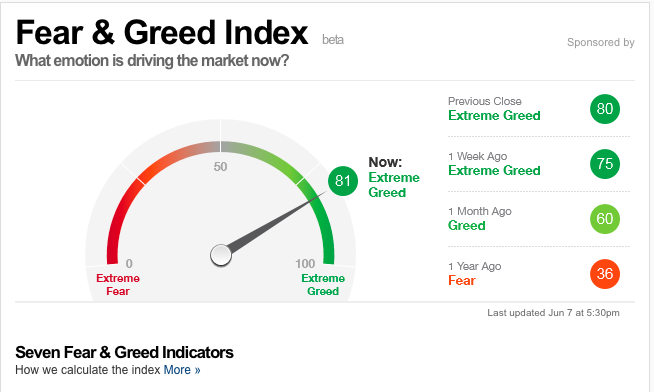 The old saw  “Sell in May and go away” (and come back in November) is not the only reason one should be cautious with the Stock Market here. There are at least 4 other powerful reasons investors should be holding substantial cash reserves. They are:

1. Market Sentiment is extremely bullish which is a powerful negative.
2. Central Banks around the world have shot their bolt. The have virtually no tools left they haven’t tried and confidence in them is fragile.
3 US Financial Markets are trading near their all-time highs. Interest rates are on the brink of moving into negative. Both factors are indicitive of Markets that are as close to exhausted Bull Markets as you can get.
4. The unexpected

Investors are driven by two emotions: fear and greed. Too much fear can sink stocks well below where they should be. Alternatively when investors get greedy, they can bid up stock prices way too far.

So what emotion is driving the market now? CNNMoney’s Fear & Greed index makes it very clear: The 4 year time period below shows that the last times the sentiment levels were at this level they preceded either sideways Market action or sharp spikes down as occurred in August 2015 as well as January 2016. The current level of greed in this market is very dangerous. While there is no guarantee that the market will turn down right now, historically the odds are very strongly against a continued rally from here and certainly not the way to bet. In the attempt to get some fire in their economies negative rates are now the policy of the European Central Bank, with a deposit rate of minus 0.40%, Switzerland, where the rate is minus 0.75%, Sweden, the rate is minus 0.35% and the Bank of Japan which has announced negative interest rates of 0.10%.

As Satyajit Das, former banker and author explains – “In effect, negative rates delay essential restructuring to remove the detritus of previous crises. It restricts the supply of credit to the wider economy, affecting economic activity. Misallocation of capital deepens the malaise, and an ultimate resolution to this global problem becomes even more costly and difficult”

Das, who predicted the Global Financial Crisis of 2008 goes on to point out two examples in Iceland and Japan where this Central Bank approach has already failed:

‘The global economy is entering an era of protracted stagnation, similar to what Japan has experienced for over a decade.” The fallout of these poor policies, Das argues, “will affect not only the business sector, but also the lifestyles and prosperity of average citizens and future generations. This experiment has already been tried in Iceland, which went bankrupt in the wake of the 2008 crisis, and now, after a painful adjustment, is on the road to recovery.”

In my view what is really worrying with markets nudging all-time highs as Das’s use of the word “malaise”. While the charts above show there is confidence overflowing in the US Stocks at the moment, there is this increasing malaise, or a weakening of confidence in Central Banks ability to keep the merry go round spinning. We saw that last Friday when it seemed to become apparent that the US Fed was yet again going to postpone raising interest rates for the first time in 2016. The Fed originally forecasting 4 rate hikes in 2016, but as occurred on last Friday economic numbers demonstrated again that the US economy remains in the industrial recession that begain in the second half of 2015.

Bottom Line: Despite of the Fed’s best efforts these slowing economic trends not only suggest we may be finally be rolling into recession, but that the Fed and other Central Banks have begun to lose the confidence of investors worldwide. Deteriorating confidence Central Banks is in my view the most dangerous factor in the Global Economy today.

Markets Near Their All-Time Highs

The two key markets in the world are the US Stock Market and the US 20 Year Treasury Bond Markets. As you can see below the US Stock Market as represented by the S&P 500 is scratching at all-time new highs coincident with the above mentioned deteriorating confidence in the Fed and extremely bullish Market Sentiment.

In this situation its best to keep it simple. Markets virtually have never moved signifcantly higher during periods of extreme bullish sentiment. Further, the Feds intention to inspire higher prices has been going on for several years now. Despite those efforts to date no new high has been seen.

In short in my view the risks outweigh the potential rewards at this juncture in time. A significant cash position of at least 30% should be maintained. Also in my view any existing positions you have should be protected by selling call options against them. In the event that the market did move higher, your stock would be called away at a higher price with the call option premiums and dividends adding to your profits. I enclose the US 20 Year Treasury Bond Market chart below which indicates like the stocks above that the market is just about as close to all-time highs as you can get. I personally cannot bring myself to buy bonds at these prices. Indeed, I think there is the potential that the greatest market crash in history will occur in the Bond markets when, as mentioned above, confidence in both Government and Central Banks collapses completely.

There is no question that Bond investors have done well in 2016, just as stock investors did quite well in the last few months prior to any modern era crash that has occurred since the famous October 19, crash of 1987. Thats when stock markets around the world crashed and the Dow lost 22.61% in one day. We live in an era where there are quite a few significant events occurring world-wide that could trigger a significant drop in the Stock Markets. Two examples:

1. On top of many insolvent European banks with troubled assets both in Europe and major emerging markets we have the upcoming Brexit vote. In less than two weeks, British subjects are scheduled to vote whether or not they will leave the European Union. This vote could trigger a huge market reaction in Europe and around the world.

2. We’ve never seen a bear market in the new age of passive investment structures and high frequency trading, but it’s safe to say that liquidity can dry up in a flash. Likely triggering a Flash Crash, destroying confidence followed by a slide into a Bear Market

If you haven’t raised cash yet I think at least a 30% cash postion is warranted. Furthermore, if you hold any open stock postions that you can sell any call options against I would advise you do so.

John Mauldin of Mauldin Economics puts the danger quite well in this comment: “And so I look at the chain of risks that are around the world — Europe, China, Japan, the emerging market total debt, the U.S. potentially going into a recession, and there’s a weak link somewhere and I just don’t know which one of them is the weak link.  But when one of them breaks I think you are going to see a cascading effect.”

Lastly, the Gold Market and Gold Stocks are still correcting their recent rally. That said we are on the brink of potential chaos and a 10% to 20% postion in Gold