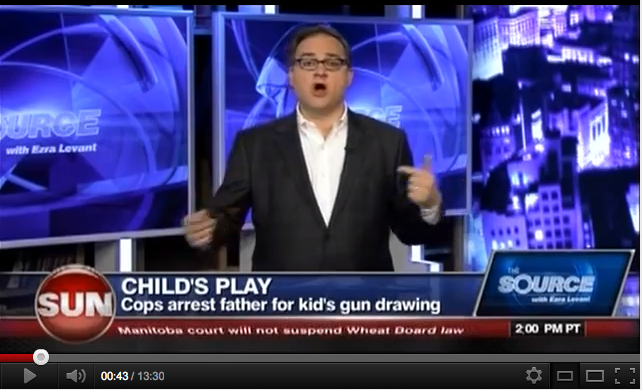 The teacher told the principal, the principal called Child and Family Services and they called police. The cops met Sansone at the school when he tried to pick up three of his children, told him he was charged with possession of a fire arm, handcuffed him and put him in one of the several squad cars waiting outside.

While Sansone was being strip-searched at the police station: told to disrobe, lift his testicles and bend over, his wife was home with their 15 month old daughter. “They came to my house, told my wife that I had been charged with possession of firearms, that she would have to come with them, and that Sundae (their infant daughter) would have to go with the social worker,” said Sansone.

Ezra Levant rips the Police and Teachers apart, noting amongst the many mistakes in this case, the police did all of the searching without a warrant.