Will the Commodity Dollars Play Catch-Up? 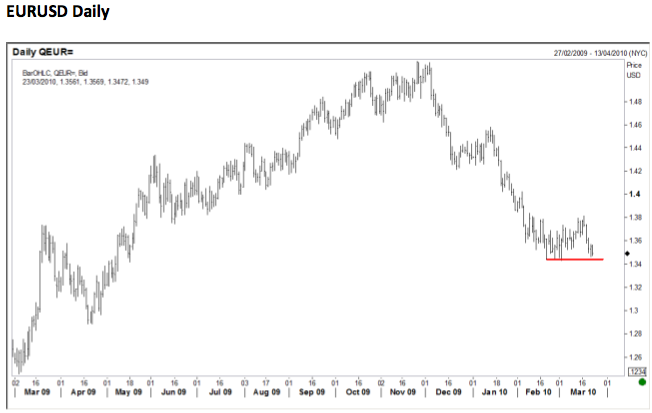 If you read us consistently, you know our views on the euro and where it’s headed.

And if you don’t know, you can sign up for our long-term currency investment newsletter and receive our latest FREE report:

Key Reasons Why the Euro is Heading to Par or Beyond against the US Dollar.

We just finalized it yesterday, and it’s a quick read, packed with the latest details and graphs on what’s tearing apart the Eurozone countries and will ultimately be tugging hard on the euro’s ankles for many months to come. (See David’s note at the end for more details …)

What I ask today is: will the euro’s weakness, if it plays out according to plan, incite a run against the commodity dollars that’ve outperformed the euro and European currency by a long-shot (at least over the last two or three months)? A close at current levels would be the lowest since last May. This very much looks like the euro’s brief correction has come to an end; a break of this support would confirm another streak lower before this move needs a real breather.

The commodity dollars, though, gained back far more ground in the last two months. Not only do they have a good ways lower before they encounter similar support levels, but they’re not nearly as far off their high marks. The Canadian dollar actually made a new high just this month! Besides the isolated problems in the Eurozone, risk appetite for US stocks has been unyielding. The S&P 500 turned back higher at the beginning of February and has barely stopped to look back, shooting to new highs and reaching levels not seen since September/October 2008.

While it is holding up, crude oil has not made nearly the same strides as the S&P; ditto for gold and copper.

The outperformance of the comdols seems to hinge on an environment where stocks just won’t roll over. But if these comdols don’t soon test their highs, they could be primed to roll over with any scare in the stock market, short- or medium-term.

Jack and JR have some hefty profit momentum going; they are seeing the market well. We would love for you to try one of our services if you haven’t already.

As Jack has so often said: “don’t do what everyone else is doing in the markets.” No doubt it can’t be that simple, but it has allowed him to position for moves others haven’t. That seems to be why our PostionTrader FX Members are doing so well lately.

If you remember, he and JR wrote the Demise of the European monetary System report back in June 2009 – a pretty good call I would say. They just released an update and now Reasons Why the Euro is heading toward Par against the US dollar can be yours FREE with your subscription.

One of the core missions of our PositionTrader FX currency service is to deliver to our Members independent ideas and analysis that will help to position ahead of the consensus. I think Jack and JR are doing that very well.

If independent ideas and excellent profit potential over time makes sense to you, then I think you will like our PositionTrader FX.

It’s our newsletter that targets forex trades with a holding period of several days or weeks, targeting major FX pairs, emerging markets pairs and key cross-rates. Members also receive market updates, price analysis, and position follow-ups to make sure they’re tuned into our every move. We assist them throughout the trade with information and stop-loss adjustments.

Please shoot me an email if you have any questions about PositionTrader FX or about signing up and becoming one of our valued Members.