Why We Don’t Swing for the Fence Trading Gold 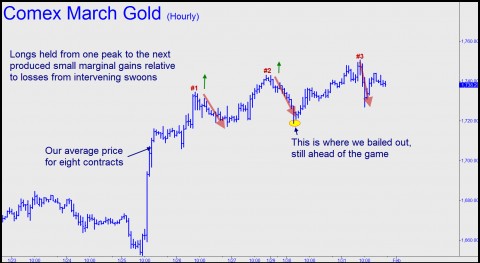 Although we’d be thrilled to be able to brag a year from now that a trade we recently advised in Natural Gas futures caught a bear-market low within two cents, we’re not prepared to bet the farm on it. Similarly, a winning gold trade that got stopped out earlier in the week may have caused us to miss a moon shot, but we’re not about to look back. For when all is said and done, we’d rather not be prayerfully holding our breath or losing sleep as gold in particular swoons, leaps, caroms and careens its way higher. Aggravation and stress aside, on a simple risk:reward basis there is never justification for buy-and-hold speculation. Yeah, we’ve heard the story about the commodity whiz who made $50 million riding a brahma bull in soybeans/cattle futures/crude oil all the way to the top. But the guy couldn’t possibly have made all of that money without experiencing devastating setbacks along the way. And he could not have kept doubling down on subsequent trades without giving it all back. In our book, it is slowly but surely that wins the race, and the massage we preach to subscribers and students who take the Hidden Pivot Course is to never risk more than $1 to make $3. This applies along the entire route of a trade, from entry to exit. Moreover, we recommend that positions be constantly&nbsp; “worked” so that s trader’s hard-won gains will not be entirely and constantly at risk.

How does that advice relate to the chart above?  To begin with, when we advised buying eight gold contracts in two places below current levels, we “knew” exactly how much we stood to make on the trade because our proprietary technical indicators said a 1771.50 target would be reached come hell or high water. We took partial profits when the futures rose as anticipated, but we reluctantly kissed the last piece of our position goodbye when it tripped a stop-loss during a particularly vicious after-hours swoon. Although our confidence in the 1771.50 target had verged on certitude – still verges on certitude — we were not about to let ego and greed supersede the boring math of sound risk management. And that is why we exited the last 25% of our long position when the futures did their fake kamikaze dive.  Now, although it could prove difficult to climb back aboard (as we intend to do), the hard work and diligence that may be required is preferable to seeing our profits gyrate wildly from day to day, and possibly evaporating entirely if price action turns even more rabid.

While we’re on the subject of managing risk, there is one more elemental point to be gleaned from the chart. Notice that April Gold made a series of  marginal new highs over the last week or so. If one were long at the first of those highs – 1734.50 on January 26 – he’d have made an additional $8.50 per ounce (on a 100-oz. contract) by holding the position till 1743.00 was achieved the next day. However, the intervening swoon to 1717.20 would have subjected the trader to a paper loss of $17.30 per ounce – more than twice the gain that would have resulted from holding peak-to-peak.  Although holding the position for another two days would have gotten one to the next, 1750.60, for a further gain of $7.50, the intervening swoon to 1718.80 would have subjected the trader to a paper loss four times that, or $31.80.  What this implies is that, over the course of the trade, the trader gambled more than $4 to make $1. You don’t need to be a trader to understand why taking those kind of odds will never make you rich. And it is why we prefer to move in and out of long positions as gold moves higher rather than swinging for the fences with a buy-and-hold, damn-the-torpedoes swagger. No bull market is going to be so generous and accommodating that traders can simply forget about their positions and let them run.  While it’s possible to strike it rich once or even twice with that approach, the odds that you will eventually go bust are overwhelming.

Who Is Rick Ackerman?

Barron’s once labeled Rick Ackerman an “intrepid trader” in a headline that alluded to his key role in solving a notorious pill-tampering case. He received a $200,000 reward when a conviction resulted, and the story was retold on TV’s FBI: The Untold Story. But to the gang at CNBC, he’s been a pariah for the last ten years – a shoot-from-the-hip kinda guy whose irreverent style got him banned from the show after an interview on Squawk Box was alleged to have gone awry.

His professional background includes 12 years as a market maker on the floor of the Pacific Coast Exchange, three as an investigator with renowned San Francisco private eye Hal Lipset, seven as a reporter and newspaper editor, three as a columnist for the Sunday San Francisco Examiner, and two decades as a contributor to publications ranging from Barron’s to The Antiquarian Bookman to Fleet Street Letter and Utne Reader. His detailed strategies for stocks, options, and indexes have appeared since the early 1990s in Black Box Forecasts, a newsletter he founded that originally was geared to professional option traders.

Rick Ackerman is the editor of Rick’s Picks and a partner in Blue Fin Financial LLC, a commodity trading advisor.