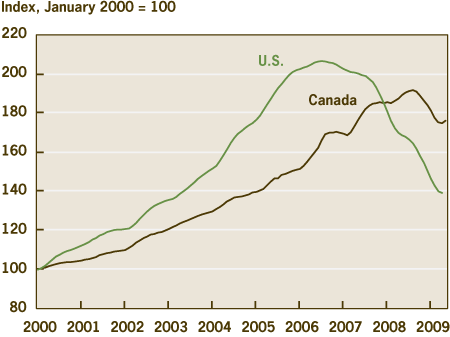 Housing markets in the United States and Canada are similar in many respects, but each has fared quite differently since the onset of the financial crisis. A comparison of the two markets suggests that relaxed lending standards likely played a critical role in the U.S. housing bust.

Despite their many points of similarity, housing markets in the United States and Canada have fared quite differently since the onset of the financial crisis. Unlike the U.S., Canada has not experienced a dramatic increase in mortgage defaults, nor has any Canadian bank required a government bailout. As a result, observers such as The Economist have pointed to Canada as “a country that got things right.”

The different housing market outcomes in Canada and the U.S. can tell us something about the underlying causes of the housing boom and subsequent bust. In particular, they can be used to evaluate the roles that low interest rates and relaxed lending standards played in the boom and bust.

Others contend that relaxed lending standards, highlighted by the rise in subprime lending, played a critical role. This loosening of standards led to an increase in housing demand, as mortgages were issued to households that were likely to have trouble making the mortgage payments. This extension of credit to risky borrowers helped fuel a housing boom and set the stage for the resulting surge in defaults, which were a big factor in the housing “bust.”

The Canada and U.S. housing market comparison suggests that relaxed lending standards likely played a critical role in the U.S. housing bust. Monetary policy was very similar in both countries from 2000 to 2008, but housing prices rose much faster in the U.S. than in Canada. This suggests that some other factor both drove the more rapid appreciation in U.S. prices and set the stage for the housing bust. A likely candidate is cross-country differences in the structure and regulation of subprime lending markets. That mortgage delinquencies began to climb before the recession in the U.S. but only began to rise recently in Canada (after the economic slowdown began), points to the significance of those structural and regulatory differences in explaining the U.S. housing crash.

Canada and the U.S. experienced significant increases in house prices and residential investment from 2000 to 2006, though prices in Canada appreciated more slowly. Figure 1 plots the S&P/Case-Shiller 20 city composite index and the (Canadian) Teranet-National Bank 6 city composite index. Both series are based on repeat sales, making these series a closer approximation to a “constant-quality” price index of nominal home prices than average house price sales. The Case-Shiller and Teranet series indicate that over 2000–2006, U.S. prices appreciated nearly twice as much as Canadian houses. However, Canadian house prices continued to appreciate until late 2008, and are now nearly 80 percent higher than in 2000.