Which Contrarians Are Correct About the Stock Market? 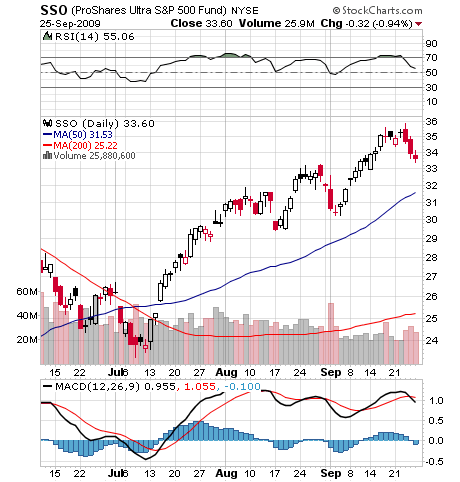 For the past several weeks, I have read and heard all types of conflicting interpretations about market sentiment as different kinds of contrarians attempt to prove their case.

Let’s begin with some of the data:

1. The American Association of Individual Investors recently reported that bullish sentiment is 42%, not an extreme, but part of a steady trend upward from the March lows.

2. The proprietary indicators at sentimenTrader indicate that both short-term and long-term sentiment are bullish and borderline extreme.

3. Short interest is at its lowest level since Februrary, 2007.

4. Insider stock sales peaked in August but remain higher than levels last seen in the second quarter of 2007. Add to this the massive amounts of stock companies are unloading into the market via secondaries and IPOs.

Jon Markman (Markman Capital Insight) recently argued that the Dow will hit 14,000 in two to three years. He dismisses sentiment indicators that include retail investors since they have (relatively) little money at stake. He claims that the “big money” is the dumb money and is extremely pessimistic. He cites a recent Goldman Sachs Group dinner where 14 out of 15 large hedge fund managers concluded stocks are overvalued. (This video explains Markman’s more nuanced perspective: a cyclical bull within a much larger secular bear market).

Finally, we have options expert Bernie Schaeffer who warns that anecdotal sentiment remains very bearish. Schaeffer references institutional money market funds, a survey of macro managers, hedge fund exposure, cash flows into stock mutual funds, and even the above Investor’s Intelligence survey (which was less bullish at the time he wrote) to support his case. He makes an excellent point about the self-reinforcing psychology of major market rallies: “Major stock market rallies have a way of causing bulls to become that much more bullish and bears to become weak and wobbly in their conviction level, as the opinions of the former group are reinforced by market action while the latter group is being regularly beaten up by Mr. Market.”

I am sure you can add your own many references to this soup!

As if it is not already difficult enough to sort out the sentiment story, insert the U.S. dollar into this mix. It is now well-recognized that the stock market rally is riding the back of a weak dollar. It now appears that the extremely cheap U.S. dollar is even caught up in the carry trade vortex that puts additional pressure on the currency. All the selling and fresh multi-month lows have generated quite a consensus that the dollar will continue to fall and has encouraged aggressive shorting of the dollar. This bearish sentiment on the dollar should imply bullish sentiment on the stock market given the mechanics of the current carry trade.

So, if market sentiment does indeed remain too skeptical, a contrarian would bet against this crowd but would also bet with the crowds stomping on the dollar’s neck. If market sentiment is actually very bullish, a contrarian would bet against this crowd and bet against the crowd shorting the dollar. I am biased to believe the latter scenario. I am still anticipating a relief rally in the dollar by shorting the British pound (and soon the Canadian dollar). To be consistent, I have to assume that such a rally will be precipitated/accompanied by a significant correction in the stock market. I currently do not think that either counter-trend move will be substantial in duration, just sharp in direction. Of course contrarians in the former camp could always assume that somehow the dollar and the market will finally follow each other higher.

Overall, no matter how we define the sentiment backdrop, it seems to me that as this stock market continues to press onward and upward, more and more people feel most comfortable dressing their opinion, bearish or bullish, in contrarian garb. And I am guilty as charged.

Be careful out there! Dr. Duru is not a real doctor, but he played one in school. After getting a B.S. in Mechanical Engineering (and an honors degree in Values, Technology, Science and Society – now simply STS) from Stanford University, he decided to plow on and get his Ph.D. in Engineering-Economic Systems (now Management, Science, and Society…for now!). He has done a few gigs doing some independent consulting in mathematical modeling, slogged through management consulting in product development and technology strategy, and is now pounding the pavement helping companies to improve the pricing of their products through analytic software and rigorous analysis. In his personal life, he eats too much chocolate and still finds time to work-out and enjoy traveling. My website is dedicated to my varied and broad interests. While I do not perform miracle surgeries or cure world hunger, I am a self-proclaimed expert on money, knowledge management and organizational learning (or at least as of 1999!), and Kim Fields. You can find material on my site on all these topics. Finally, note that Dr. Duru serves as my name, the name of this site, and it happens to be a registered trademark.