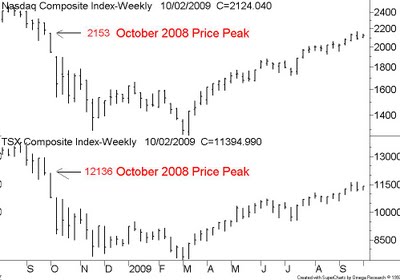 “The average duration of a bear market in months is 14-months with the longest modern bear of 1973-74 running almost 24 months. If you’re a bear we are now into 24-months from the peak of October 2007. Clearly the math does not support a current bear environment.”

Dilemma – a noun pronounced [di-lem-uh] meaning a situation requiring a choice between two equally undesirable alternatives. The great stock market advance that began in early March 2009 has set up an investment dilemma for both the bulls and the bears.

Bearish investors assumed the great advance to be a sucker bear market rally and sat in cash alternatives waiting for a major correction – possibly back down to re-test the March 2009 lows. Dilemma, do they capitulate and buy in now and risk a correction or do they sit in cash and wait for a correction that may never materialize?

Bullish investors who enjoyed the advance assume it is a youthful bull market and fear not to remain invested. They also fear that a correction could wipe away much of their March to date returns. Dilemma, do they sell now and try to re-enter at lower prices that may never materialize or do they hold and remain fully invested and risk a correction?

Perhaps some historical data on bull and bear markets will help when we examine the duration of the bull and bear cycle over the past 100 years.

The average duration of a bear market in months is 14-months with the longest modern bear of 1973-74 running almost 24 months. If you’re a bear we are now into 24-months from the peak of October 2007. Clearly the math does not support a current bear environment.

The average duration of a bull market in months is 24-months with the longest modern bull of 1990-1998 spanning 94 months. If you’re a bull we are now only 6-months from the bottom of March 2009 and so the math does not support the end of the current bull.

The other issue to support the bull market scenario is the growing number of new 52-week highs in many of the important stock sectors. Yesterday stocks listed on the Nasdaq, the NYSE and the TSX posted over 200 new highs and only 14 new 52-week lows. As we move into October most of the broader indices are approaching new 52-weeks highs with the Nasdaq currently within 2% of the October 2008 peak and the all important Russell 2000 while 15% below the October 2008 peak is above the November 2008 peak

Our chart below looks at the TSX Composite and the Nasdaq October 2008 price targets – if these 52-week targets are overcome, the bears will capitulate and trigger a bullish stampede into equities. Bill has been writing a weekly business column in the Toronto Star since 1997, and was an early contributor to the former “Report on Business Television”. He has founded the Getting Technical Market Newsletter in December 1998. Bill is also an Instructor for the Canadian Securities Institute. He is also a contributing author of the textbook for the technical analysis course offered by the Canadian Securities Institute (CSI. He is also called upon to provide training to industry professionals on technical analysis at many of Canada’s leading brokerage firms.