Panic in the Air: What the end of the Bond Market looks like 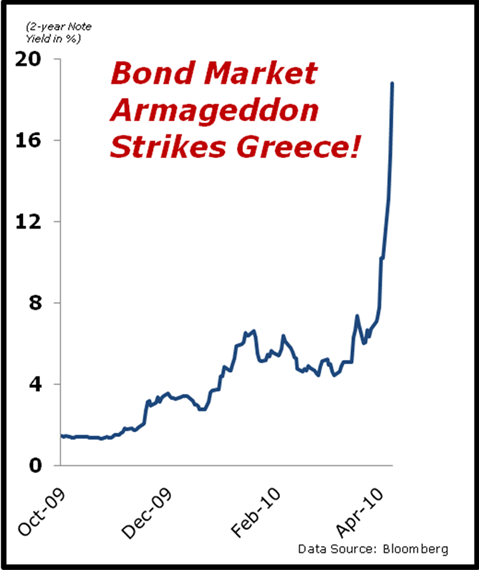 The chart above shows the yield on the benchmark 2-year note in Greece. Just a few short months ago, Greek sovereign yields were hovering around 2.1 percent. On Wednesday, they shot up as high as 18.9 percent!

Translation? The cost of borrowing for the Greek government — not some subprime mortgage customer or deadbeat credit card holder — shot up almost NINE-FOLD in the span of six months.

… but on a sovereign government bond!

Folks, THAT is bond market Armageddon. And it’s playing out now. Right on the trading screen of every investor around the world.

Portugal’s benchmark 2-year note yield just blew out to 4.82 percent from 1.58 percent. That’s a tripling in interest rates in less than a month.

Even bigger European economies, like Spain, are getting whacked. Yields there recently shot up to 2.08 percent from 1.36 percent.

Bottom line: A virulent sovereign debt contagion is spreading like wildfire throughout the euro zone. In the short run, that will likely get the Germans to back down on their bailout opposition.

They’ve been holding up a package that would give Greece up to $60 billion in aid from richer European Union nations and the International Monetary Fund. The crisis may temporarily take a breather if the package gets approved.

But here’s the thing: If the Greeks get bailed out, who’s next? And where the heck is all the bailout money going to come from? Policymakers may need to cough up almost $800 billion to “save” everyone, according to economists at firms such as Goldman Sachs and JPMorgan Chase.

The problem is that nobody has that kind of money laying around! So it’ll have to be borrowed. And if it has to be borrowed … from a European bond market that’s already falling apart at the seams … what’s likely to happen? Even more selling, which would drive bond prices down and interest rates up!

Coming Soon to a Bond Market
Near You: Financial “Ebola!”

So far, this is predominately a problem for continental Europe. Our Treasury prices actually rose a bit during the worst of the European debt selling.

But I believe it is woefully ignorant, provincial, and arrogant for us to assume something similar can’t or won’t happen here.

Even the Secretary General of the Organization for Economic Cooperation and Development likened the crisis to the “Ebola” virus, saying “it’s threatening the stability of the financial system.”

When you think it through logically, you can’t help but ask: Why wouldn’t the Grim Reaper eventually come knocking at OUR door?

After all, OUR deficits are out of control! OUR debt level is through the roof! OUR politicians are burying their heads in the sand, just assuming they’ll be able to keep funding their profligacy at rock-bottom rates forever. Those are precisely the same problems that built up in Greece for months on end.

Then one day, the lid blew!

Do I expect a nine-fold rise in U.S. 2-year note yields? A 40 percent plunge in bond prices in just a couple of months? Not really.

But I do believe the bond market will force us to take our fiscal medicine. I do believe a sovereign debt crisis is brewing here. And I do believe it will be just one reason our interest rates will head significantly higher.

So please, invest and prepare accordingly. By the time the bond market bleeding starts, it’ll be too late.