What is gold really worth? 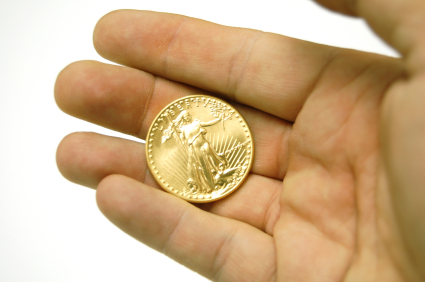 “There are a lot of arguments regarding gold’s true value. How can anyone justify that an ounce of gold is worth over $1100/oz?”

“Last year, the world’s central banks became net gold buyers for the first time in two decades and according to CPM Group, this trend could continue. Right now, central banks hold approximately 18 percent of the total gold ever produced. “

Comment by Mark Leibovit: “Gold finished a disappointing week with another loss on Friday.

I am still very much a bull on Gold because we’re in a broad twenty-year up cycle and though there will be detours along the way, we’re headed dramatically higher. Shorter-term, time cycles point to the strong positive seasonality now into summer and the fact the U.S. Dollar Index is declining (despite negative inverse action on Friday) should soon reinstate Gold’s uptrend. The hoped-for signal would be broad-based Positive Volume Reversals ™. Perhaps we may have to wait and see if the broad stock market corrects here to find a more suitable launching pad for Gold and Gold equities as they have tracked together more often than not tracking together.” Special Offer from Mark Leibovit for Money Talks only: Go HERE and use the Money Talks promo code CBC12210

What is gold really worth?

Gold, like the pieces of paper in our wallets we call money, is something that people can put value to. But there’s one big difference: You can print as much money as you want. But you can’t with gold. There’s only so much.

The fact is gold really does nothing but sit around and look pretty. And believe us, because of this, there are many anti-gold bugs out there who have been shooting darts at our faces for our continued belief in gold-related plays.

So let’s clear the air once again. We are not gold bugs. But we do take advantage of the obvious. And the obvious is simple:

Gold is worth a lot of money right now

And everyone wants a piece…especially the banks.

Last year, the world’s central banks became net gold buyers for the first time in two decades and according to CPM Group, this trend could continue. Right now, central banks hold approximately 18 percent of the total gold ever produced.

A recent Bloomberg survey reported 15 of 22 analysts forecasting that gold would make further gains this year, with Goldman Sachs predicting $1,380/oz in the next 12 months and HSBC predicting a peak of $1,300/oz in 2010 and as high as $5000/oz in the next five years.

During the past decade, precious metals were the best-performing asset class, beating property and shares with returns of nearly 250 per cent. People who invested money in precious metals, such as gold, silver and platinum, during the ten years to December 2009 made returns of 242 per cent, the equivalent of a gain of 13.1 per cent a year.

It’s no secret that gold, the most recognized of the precious metals, has taken center stage.

In past newsletters we told our readers to follow where the smart money goes (see Where the Billionaires Invest).

And it’s still going into gold

….read more HERE (scroll down to the title “And it’s still going into gold” above.