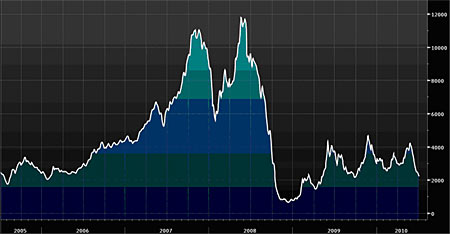 So now we have a fiercely oversold market sparked by a Dow Theory non-confirmation.

This should revive bullish sentiments although I believe only sharp traders and speculators will profit from this “sudden” rally. As I see it, the bear is passing time and having a little fun with the stock market crowd. And all the time, the top of this rally from the June low grows bigger and bigger. By the way, now you see why I warned subscribers to avoid selling short. If you’re short, you can be killed by a rally of this intensity. – Richard Russell July 7th Dow Theory Letters

This article by MoneyWeek. Try out their three-week free trial

The shipping index has dropped 50%. What does it mean?

Stock markets have had a rough week or so. But that’s nothing compared to what’s been happening in a slightly more obscure market.

The Baltic Dry measures the cost of shipping dry bulk goods – commodities such as iron ore and coal, for example. The index fell off a cliff during the credit crunch in 2008, as credit to finance global trade froze.

So what is the current sell-off telling us about the state of the global economy?

Should you worry about the shipping index sell off?

The Baltic Dry Index (BDI) has fallen almost in half since the end of May – as you can see on the chart below: But let’s put it in perspective. This is nothing compared to the 95% drop the index saw before and during the financial crisis of 2008, as you can see.

And by and large, analysts are saying that we don’t need to get too worried about this sell off either. Why not?

The BDI measures the cost of shipping raw materials from one place to another. If the price of moving raw materials falls, then you’d assume that people are moving less stuff around the world. Presumably, that’s because demand for finished goods is also slowing down. Therefore, a drop in the BDI suggests that the global economy must be slowing down.

That’s all very logical. But it misses one point – the supply side. Because it measures the cost of shipping, the BDI might also be saying that there are simply too many ships. The BDI hit a record high in 2008, as demand for shipping rose far ahead of the supply of ships available.

So, as you’d expect, that meant that more ships were built. And fleets are still growing now, even although demand has fallen to more normal levels. More ships and static demand means shipping rates are falling.

As dry bulk researcher Derek Langston of Simpson Spence and Young told the Financial Times last month: “We still anticipate this year we will see a record year in terms of annual growth of trade. However, this is also accompanied by record growth in fleet supply.”

So everything’s just fine then? Well, we wouldn’t go that far. Melissa Kidd at Lombard Street Research is rather less sanguine about the fall in the index. Sure, “the quality of the BDI as a leading indicator has been disrupted by an oversupply of shipping.” But “the message of weaker global activity is supported by a range of other indicators.”

One big factor in the fall has been a drop off in Chinese steel mill demand for iron ore. Iron ore shipments fell year-on-year in both April and May, according to Bloomberg. Iron ore is of course, a key ingredient in steel manufacturing.

But domestic steel prices in China have been falling for the past ten weeks. This is partly down to tighter monetary conditions. The construction industry is the major driver of steel demand. China’s attempts to curb the property market have hit steel consumption and therefore prices.

The trouble, says Kidd, is that “China has been the world’s engine of growth for… commodities over the last 12-18 months. A cooling off in Chinese demand growth – prompted by ongoing monetary tightening – will impact heavily on global price developments” in the commodities market.

And China’s not the only one slowing down. “The JP Morgan Global Manufacturing PMI has fallen from a high of 60.9 in April to 57.0 in June.” The reading for new orders was particularly hard hit, falling from 60.3 to 55.5 over the same time. “While a PMI of over 50 points to economic expansion rather than contraction, the drop in the index components points to a slowing down in the pace of recovery.”

A turning point for the global recovery

What all this boils down to, says Kidd, is that “the global recovery has reached a turning point as the momentum provided by the inventory cycle wears off.” In other words, company restocking is now ending, and we’re waiting to see what sort of ‘real’ demand remains to pick up the slack once government stimulus is removed.

Just how bad things get remains to be seen. But even a slowing of demand doesn’t bode well for hard commodity prices in the second half of the year.

Every day, an awful lot is written and spoken about finance and investing. Much of it is incredibly boring, lots more is either meaningless or plain stupid, and most of it is a complete waste of your time.

Our aim is simple: to give you intelligent and enjoyable commentary on the most important financial stories, and tell you how to profit from them.

So how do we do that?

Firstly, by talking to thoughtful people who know their stuff. That means City professionals, fund managers, stockbrokers, industry experts, and the commentators that we respect. We have a wide range of financial professionals who write regularly for us, come to our monthly ‘Roundtable’ discussions, and who contribute their expertise to the ongoing MoneyWeek debates.

Secondly, by reading a huge amount of financial news and commentary every week. That means all the mainstream sources – press, websites and magazines – and many more specialised ones, such as broker reports, newsletters, newswires, trade journals and so on.

And finally, by writing articles that we would want to read ourselves, which means intelligent, thought-provoking, practical (as in, advice you can make money from) and entertaining, written in normal English.

Try us out with a three-week free trial