We see a major divergence 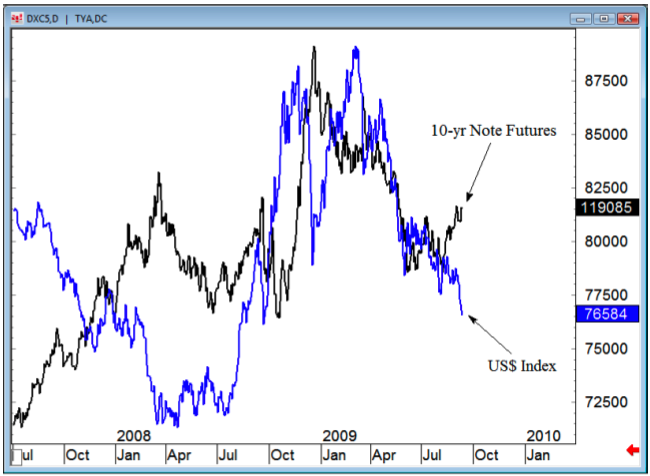 “Run for your life from any man who tells you that money is evil. That sentence is the leper’s bell of an approaching looter.” – Ayn Rand

A very astute member of Black Swan services pointed out the latest growing divergence between the bond price action the last couple of days, and the dollar…The question: What does it mean? The short answer may be that global markets are now normalized and the tight correlations we’ve been witnessing the last several years, during both the boom and the bust, are changing.

The chart above compares the US$ index with the 10-year Note futures.  The reason this is a divergence, compared to the recent past, is because higher 10-year Note prices have usually defined risk aversion, and risk aversion is usually met by a rising dollar.  We know that’s not happening.

But this divergence, or differing environments i.e. risk aversion versus risk appetite, can best be viewed comparing the 10-yr Note futures to the S&P 500 futures index.  Since mid-August, this pair has started to move together—higher stocks and higher bond prices. If this represents some outside portfolio flow into the US, why is the US dollar getting creamed?

And if the US dollar is getting creamed, why are people buying paper denominated in US dollars—10-yr Treasuries?

This isn’t the only major change in correlation we are witnessing, we see a major “divergence” (divergence based on past price action, doesn’t necessarily make it a divergence now; we need Mr. Hindsight’s visionary powers to prove that) between the Japanese stock market and USD-Japanese yen pair.  Good news for Japan is finally also being reflected in the Japanese yen.  In the past, any good news—reflected by the stock market—was usually met with a weaker yen as it juiced local risk appetite to go offshore for yield.  Maybe this can be more easily explained by the weight of portfolio flow into Japan on optimism the new regime will make some real changes. Does a weak currency have to be met by weak bond prices i.e. does selling the currency automatically mean selling the bonds?  Not necessarily if the government is issuing and buying at the same time (or maybe domestic consumer savings is growing rapidly and going there).

Buying bonds domestically and using the currency internationally as rocket fuel to boost other asset markets in the hopes of reviving demand based on asset wealth effect i.e. implicit weak dollar policy, could be the game Uncle Sam and his advisory staff are playing.

There has been much talk, and obviously much price action, to support the idea the US dollar is now the world carry trade currency i.e. with short-term yields being so low— grabbing the mantle from Japan.  Maybe!

But if we consider real yields (nominal minus inflation) on the 10-year Notes, the US is still among the highest of the major currency countries.  We are not sure if this indicates there may be a floor on the dollar, as global investors can buy relative safe yield cheaply. Or whether it means nothing at all and the US dollar has become the carry trade currency of choice.

Or of course a third options, the bond guys see troubles ahead and are positioning before the double-dip hits the fan.  Place your bets.