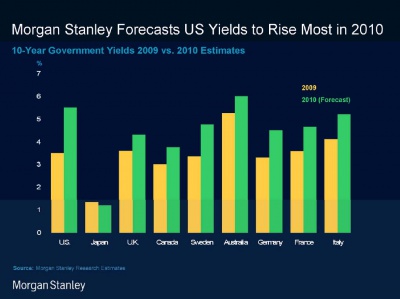 This summary from ZeroHedge.com whose founder Tyler Durden is possessed of the belief that a return to (more) efficient markets is a possibility and a necessity. Refugee of various asset managers and advisers, as his namesake, Tyler remains convinced the current model is flawed and a deleveraging at every level of modern society is needed to reignite the fundamental entrepreneurial spirit. The recent evolution of the credit market in the US is seen on the next slide: if indeed the 10 year hits 5.5% this will be the first major break of the secular trendline ever tighter since the 1980’s bull market. Can someone make the case that all a key reason for secular market gains over the past 30 years have been on the back of a consistently lowering cost of debt capital? We think the answer is a resounding yes. The last observation highlights the expectation that the 2s10s curve will steepen to a record 325 bps by early Q2. Whether this happens as quickly as expected will depend on the presence of an “accelerant” which MS defines as the following:

(Larger Image of the Chart below HERE. ) What is missing are the implications for the economy if MS is indeed right. But those are all too obvious, which is why the Fed will do everything in its power to prevent that from happening.