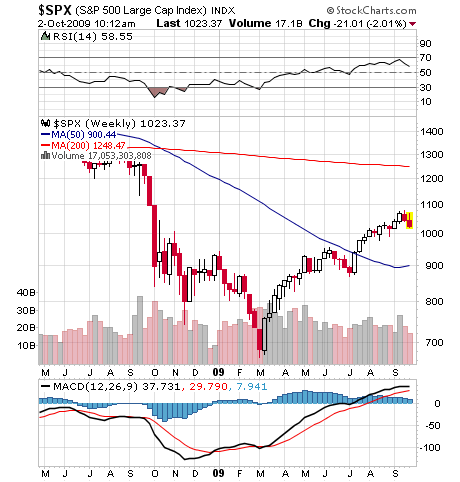 MarketRemains In A Topping Pattern

Michael Campbell will be hosting and I will be presenting at the ‘All-Star Trading Super Summit’ on Saturday, October 24, at the Sheraton Wall Centre in Vancouver, British Columbia. Below is his formal invitation. Vancouver is always fun and I get all the salmon I can eat. Hope to see you there. Sign up today!
http://www.vrtrader.com/files/MichaelCampbellinvitation-Oct09.pdf MarketRemains In A Topping Pattern – Looking To Buy? – Wait!

It was another ‘Turnaround Tuesday’ and Monday’s optimism turnend into a Tuesday correction – all despite the antics and fireworks of Apple Computer. Indexes, with the exception of Nasdaq due to Apple, held Monday’s highs on Tuesday. Though the intermediate trend (into mid 2010) is likely higher (Dow 11,300 or greater?), short-term it is my opinion that time has run out on this rally. Next week hosts potential end of the month ‘window dressing’ which should be bullish for the market, so if we see further weakness over the next three or four trading sessions it might be wise to lighten up on short positions or reverse ETF positions.

We certainly did not see a ‘Turkey Melt-Up’ yesterday – the headline of my morning commentary. As I’ve been reporting for quite some time, a 50% retracement of the bear market decline translates into 1120-1130 in the S&P 500 and we barely saw 1100 while the equivalent in the Dow Industrials is 10,300 and we traded only at 10,098. So, I suppose there is more ‘room’ to the upside should the PPT decide to charge ahead to the upside next week. At this juncture I am not inclined to be playing the long side in any extensive manner, except for very short-term trading intra-day or perhaps overnight. I am on a TIMER DIGEST ‘Sell’ signal looking to capitalize on a retracement with a view to reverse back to a ‘Buy’ signal sometime.

The government reported that housing starts have been flat for four straight months. (See the Economic News section below) The tide seems to be turning with regard to housing data as the euphoric rallies that were generated by the slightest bit of positive or even less negative news are now being replaced with the somber reality that any announced real estate recoveries were probably nothing more than wishful thinking.

Once again, however, a weak start was met with a steady inflow of buyers to push the indices well off of their lows. The ‘buy the dips’ crowd is still at work, but their resolve is being tested more and more these days. Even with so many companies beating artfully lowered expectations, this market is having a tough time rallying.

Apple’s strength did help the Nasdaq 100 to a loss of only 0.03%. Another bright spot was the performance of the Dow Transports, which gained 0.18%.

Technology stocks performed relatively well (XLK -0.33%) thanks to the good earnings reports from Apple and Texas Instruments. On the other hand, Energy (XLE) fell 0.64% and Materials (XLB) dropped 1.05% as commodity prices fell on a bounce in the Dollar and concerns over economic growth and demand for natural resources.

SanDisk swung to a third-quarter profit as revenue surged from the year-ago period. The Milpitas, Calif.-based company earned $231.3 million, or 99 cents a share. Last year, it lost $165.9 million, or 74 cents a share. Adjusted net income, which excludes one-time charges, was 75 cents a share for the most recent period. Revenue rose 14% to $935.2 million. Analysts were looking for earnings of 26 cents a share on revenue of $790.9 million. SNDK rose 9.6% in after hours trading.

Yahoo said cost cuts helped its third-quarter net income more than triple to $187 million, or 13 cents a share, from $54.3 million, or 4 cents a share, in the same period last year. Earnings on an adjusted basis were 15 cents a share. Net revenue came in at $1.13 billion. Analysts expected earnings of 7 cents a share on $1.12 billion in net revenue. Yahoo also forecast fourth-quarter revenue of $1.6 billion to $1.7 billion. The company’s performance during the third quarter indicates that its “major businesses have stabilized,” Yahoo Chief Executive Carol Bartz said in a statement. YHOO gained 5.2% after the market closed.

Mark was named the #1 Gold Timer for the one-year period ending March 25, 2008 by TIMER DIGEST.
The weekly VR Gold Letter focuses on Gold and Gold shares. The letter is available to Platinum subscribers for only an additional $50 per month and to Silver subscribers for only $70 per month. Email me at mark.vrtrader@gmail.com.