Posted by Rob Zurrer for MoneyTalks.net 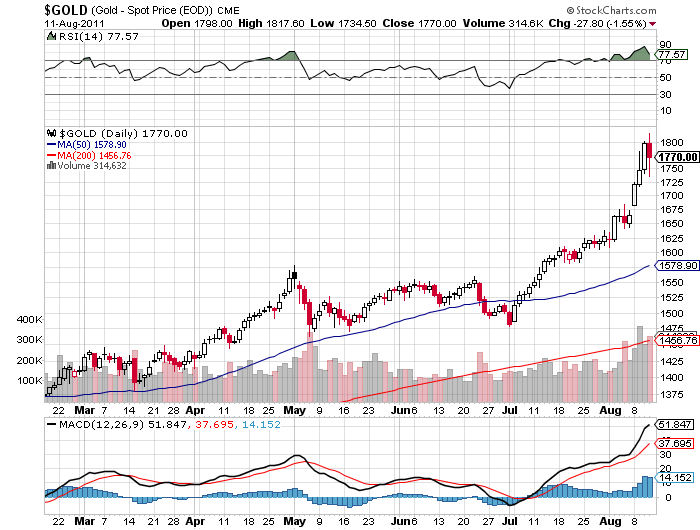 “Gold has gone too far to fast“ says Market verteran Peter Grandich who has been aggressively net long from near $300 an ounce.

“Notice overbought readings and one of my biggest concerns, the spread between current prices and the 200-Day M.A.“ Peter is concerned that the empty boat he has ridden in on the way up is suddenly overcrowed. Also that some sentiment indicators and sudden near parabolic move has set up a “major correction or worse” in what he calls The Mother of All Bull Markets. “I find it quite easy to accept a full participation from $300 to now and still “half-in” until further notice”. Long-term Peter maintains his target of $2,350.

Another Long Term Gold Bull Mark Leibovit, started selling late in the trading day Friday August 5th when he urged his readers to sell all their mining stocks. After the close on August 11th he noted in a bulletin that  his cycle work, forecast model and technical expertise is in volume analysis have all intersected and expects at a minimum a corrective pullback into  the $1,600’s.  While Mark is not selling his core holdings in gold, he does think its time traders made a decision whether to hold, sell with intention of buying back lower, or even shorting using an inverse ETF.

Long Term Gold Bull and go-to Analyst for Mining Companies in Vancouver, Dr. Martin Murenbeeld wrote on July 15th that he had “I have never been this bullish on gold”. Clearly Martin was dead right as gold rose $300 from when he made that commment. Intertestingly, Martin also notes that “It is very possible we will get a little bit of a pullback in gold prices”. Martin goes on to say that when gold falls the equity markets tend to get a bid.

Well if getting a bid in Equity Markets will remove focus from gold prices you’d better watch out. One of the earliest and most consistent gold bull’s, the legendary 87 year old Richard Russell of Dow Theory Letters declared in bold print today that “the bottom of the (stock market) correction is IN, and that the secondary trend of the market has finally turned bullish”. Be clear, Richard is not selling his gold but he is saying:

” gold is becoming extended and overbought. I expect gold to be erratic an unstable like the rest of the market, and it will takes guts to sit with gold over coming weeks.“

All in all some of these wisest minds in trading and markets who have been bullish gold since the low $300’s or less are sensing a pullback.  A good time to review your exposure and take action if required.