US Dollar Alert – Look Out Below! 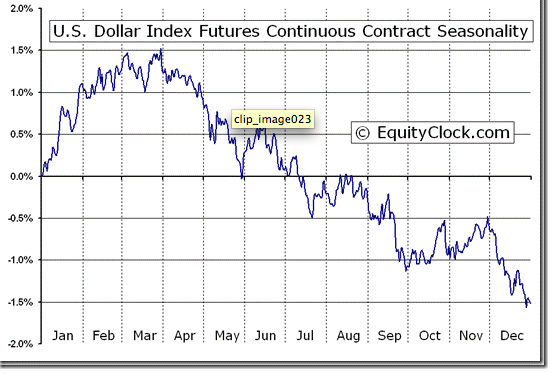 The U.S. Dollar has a history of peaking in March and moving lower until at least June. Is history about to repeat?

A 20 year seasonality study recently completed by EquityClock.com shows that the U.S. Dollar tends to move higher in January and February, peaks in March and trends lower until at least the beginning of June. The U.S. Dollar Index currently has a deteriorating technical profile. The Index reached an intermediate peak on February 19th at 81.34. Short term momentum indictors including Moving Average Convergence Divergence and Relative Strength Index have rolled over from overbought levels and continue to trend lower. Intermediate downside risk is to the top of a previous trading range at 78.45.

The U.S. Dollar is expected to remain under pressure until at least June this year due to a series of political and economic events:

The U.S. Dollar is following its seasonal pattern once again. Preferred strategy is to avoid investments in U.S. Dollars unless fully hedged. Commodities priced in U.S. Dollars will see higher prices under this scenario. Basic material and energy securities will outperform as the U.S. Dollar moves lower.